Looks Like An Interesting Test Coming in Boca Chica

As we were talking about the other day, it looks like SpaceX Boca Chica has switched their emphasis from more test flights with Starship prototypes SN16 to SN19 over to preparing their infrastructure for the attempt at an orbital flight in the third quarter.  Today, Teslarati drops a couple of stories on what appears to be a big test coming.

In the first story, Elon Musk has confirmed that the orbital Super Heavy boosters will carry 29 Raptor engines instead of 28, the previous latest number.  He also remarked that it's designed with the intent to go up 32 engines in the future.  BocaChicaGal posted this photograph of what appears to be the thrust puck for a Super Heavy.  To be honest, what struck me first about this is that if you look at the surface, everyone one of those flatter areas has the marks from being machined on a milling machine - probably CNC.  That piece of metal is about 9 meters in diameter, or about 29-1/2 feet.  That's one really big milling machine! 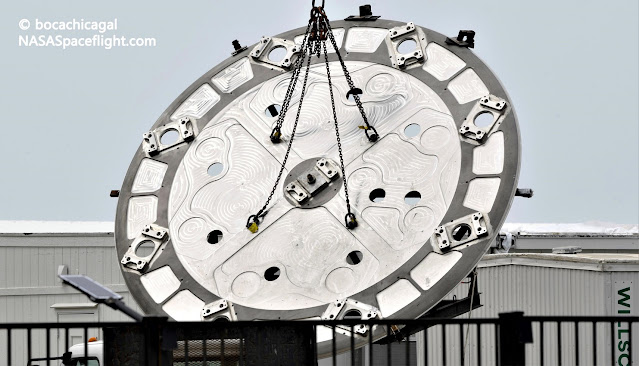 You will note that there are nine rectangular pieces on holes through the puck, while other holes do not have a rectangular piece.  Why nine?   That answer goes over to the next article, which talks about what appears to be hydraulic ram test set which will push on a that thrust puck after it gets built into a static test rig.  The thrust of 29 Raptors is around 12.8 million pounds at full power.

A couple of amazing factoids show up in those articles.  The first one is that Musk revealed that the Raptor assembly line is producing one new engine every 48 hours.  That's about 180 engines in a year; and in a system with a Starship carrying three engines and a Super Heavy booster carrying 29, those 32 engines would require 64 days.  A Starship/Super Heavy every two months?

Another amazing factoid is that the current Raptor engines will deliver that 12.8 million pounds or 5800 tons of force.  Elon is planning for Super Heavy boosters to have more than 7500 tons of thrust long term, by upgrading the thrust from 200 to 234 tons each and going up to 32 engines per booster.

All of which makes me wonder how much thrust they'll use to test the thrust puck. 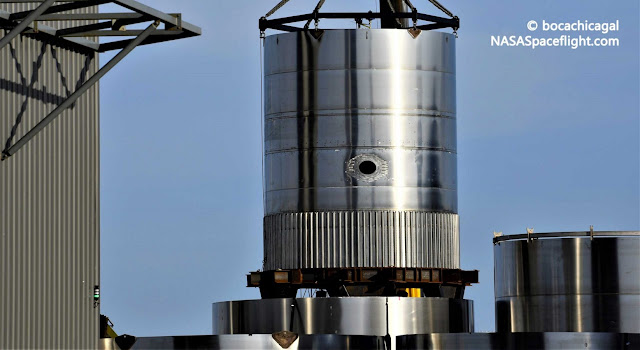 This is reported to be the test tank that will be mounted on top of the hydraulic rams shown in the previous video.

Even in its weakest configuration, Super Heavy will still produce over 60% more thrust than a Saturn V.  That unprecedented thrust demands a structure capable of surviving extreme forces while simultaneously feeding up to 32 Raptors up to ~28 metric tons (~61,000 lb) of propellant every second and withstanding several thousand tons of liquid oxygen – all without leaking, cracking, or changing shape too much.

No prospective dates for this testing have been announced, but I'll be watching for that.