A Rocket Story Getting Little Coverage

Last week, during a budget conference call, the Air Force let on that they're very interested in using rockets to deliver cargo around the world.  The linked article on Ars Technica says they're looking to fund $47.9 million.  Still a tiny fraction of their $200 billion budget, but real money to anyone who doesn't come from DC.

Military officials said they were elevating the cargo initiative to become the newest "Vanguard Program," indicating a desire to move the concept from an experimental state into an operational capability.

"This idea has been around since the dawn of spaceflight," said Dr. Greg Spanjers, an Air Force scientist and the Rocket Cargo Program Manager. "It's always been an intriguing idea. We've looked at it about every 10 years, but it's never really made sense. The reason we're doing it now is because it looks like technology may have caught up with a good idea."

It's worth assessing this sort of advance in cargo shipments in an era when there are several startup companies working to provide the next generation of supersonic passenger travel.  Companies like Boom, a company that just signed a contract with United Airlines to deliver 15 supersonic passenger jets by the end of the decade, Spike Aerospace, and Exosonic.  I would assume that cargo versions of these supersonic lawn darts are likely to be developed as well.  The difference is that the Air Force isn't talking about supersonic, they're talking about hypersonic.

How fast are we talking?  As Dr. Spanjers said, "a rocket can get around the world in 90 minutes, and an airplane cannot."  Yes, that implies a delivery halfway around the world in 45 minutes.  About 95 percent of military supplies are delivered by commercial rail, airplane, and boat services, so this would be an extension of that logistics service.  It has long been a dream for the DOD to provide very rapid, point-to-point cargo delivery.  The best supersonic proposals shave hours off a 12 hour flight, but they don't cut it to 30 to 45 minutes.

Officials took pains during the call to not single out any one company as a potential provider of services. However, the grandiose aims of the rocket cargo program, seeking to move as much as 100 tons at a time, would seem to limit the number of potential suppliers. It points most directly to SpaceX and its under-development Starship capability. SpaceX has said it is capable of launching 100 tons to orbit and then vertically landing back on Earth.

"When a rocket can only launch, you know, a few 100 kilograms or maybe even 1,000 kilograms, it's interesting but not game changing," Spanjers said. "It's the fact that we're looking at commercial rockets out there that are in the 30 to 100 ton class."

He added that the military is interested in commercial rockets—that is, those built by industry, largely through private investment—that incorporate reuse to keep costs down. This would seem to limit the vendors in the near term to SpaceX and potentially Blue Origin, with its reusable New Glenn vehicle.

I have a hard time visualizing how they'd do it because I haven't paid much attention to how cargo gets into and out of one, but if Starship can deliver 100 tons across the planet, I understand an M1 Abrams tank weighs under 70 tons.  Starship could deliver that with some spare parts.

I get the feeling from reading the interview with Dr. Spaniers that he was equal parts doing his best to not say, "we haven't said it's going to be SpaceX" and to recognize that other defense contractors might see how to do it, too.  While neither the Starship Superheavy combination nor the New Glenn have flown, Starship is clearly farther ahead in development, and both are ahead of anything else any other contractor has announced.  The budget document (pdf warning) says the Air Force doesn't intend to invest directly into the vehicle's development.  However, it proposes to fund science and technology needed to interface with the Starship vehicle so that the Air Force might leverage its capabilities.

As they say, it's not a really new idea.  One comment at Ars Technica linked to this '60s concept art. 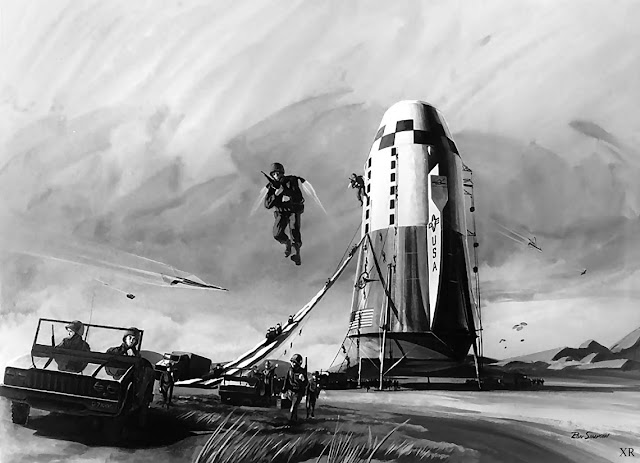 Perhaps another image from our youth will getting transformed into reality.