Sounds better than Space Ketchup that I've used a few many times before.  What do you think?  As with those posts, it's a round up of small stories that caught my eye but don't have much to be said about each.

The core stage of NASA's SLS was mated with (bolted to) its two solid rocket boosters earlier this week, and continues to prepare for its initial Artemis flight in November.  This fast motion video was shot in the Vehicle Assembly Building.

Regular readers know I'm skeptical of that conceptual date.  To borrow a few lines from an early March article on SLS before the successful Green Run test:

Maybe I'm pessimistic.  I don't think SLS has made one date commitment in the program's history.  The vehicle was supposed to have flown years ago.  If it were to launch in winter of '22, I'd think that was an incredible victory for SLS.

Of Course I Still Love You at the Panama Canal

The "ship shipping ship" Mighty Servant 1 carrying the SpaceX recovery drone OCISLY pinged on a position sensor outside the Gulf of Mexico side of the Panama Canal today, at 3:53 PM EDT. 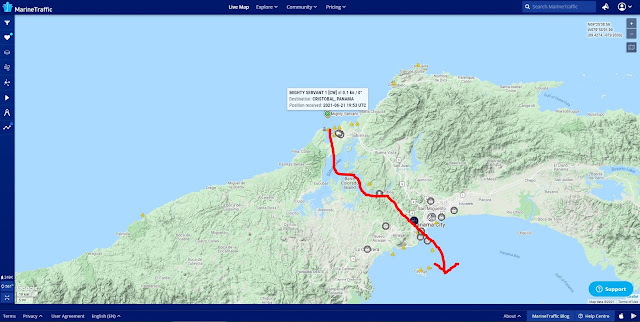 There's ordinarily a wait to get into the canal and go through, but nobody knows how long they'll wait.  It's likely the ship will have to wait a couple of days to go through the canal with a backlog of 70 ships waiting to go through.  I really don't know the protocols, if companies can pay more to get expedited or what, but those are the reports I'm seeing.  Eric Ralph at Teslarati says not later than Friday, maybe sooner, and then 10 days to Long Beach.

At SpaceX Boca Chica, Work on the Launch Tower Proceeds

Since the last update a week ago, the next section of the Orbital Launch Integration Tower was stacked on the tower, the second to last section was transported to the launch complex and the last section is reaching completion at the Shipyard.  This photo is from the 13th, and shows what's referred to as the fourth section being added. 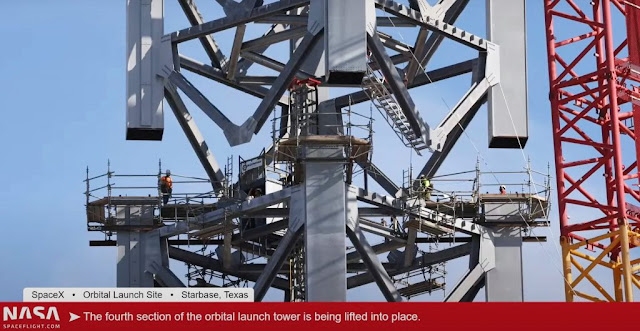 It's looking more and more like the OLIT is being prepared to try to catch the Super Heavy boosters.  The running joke is that Elon was getting bored with landing rockets on their legs on a postage stamp 500 miles offshore, so he thought they'd make the rocket land under power between two arms on a tower and let the tower catch it.  Never mind that nobody else in the world has caught up to getting rockets to land standing up after a mission, on their tails, like every science fiction story we ever read.