A Couple of SpaceX Stories - One Routine, One Not

The routine story is that we have another Falcon 9 launch Friday afternoon.  That's June 25th at 2:56 pm EDT or 18:56 UTC, if you prefer.  The mission itself isn't very routine: it's called Transporter 2 and will be a rideshare flight to a sun-synchronous orbit with numerous small microsatellites and nanosatellites for commercial and government customers.  We don't know quite how big the payload will be.  Transporter 1, launched in January of this year, carried 143 small satellites, setting a record for the number of spacecraft flown on a single rocket.

A Sun-synchronous (heliosynchronous)  orbit is a polar orbit (or near polar) in which the satellite passes over any given point of the planet's surface at the same local mean solar time.  That means the lighting angle is the same every day, and the orbit precesses through the year so that the lighting angle remains the same.  This greatly simplifies monitoring places on the globe remotely because across long parts of the year, or multiple years, photos can just be put beside each other.  Because these payloads are going into Sun-synchronous orbits, it's safe to assume they're imaging or reconnaissance satellites, whether commercial or government. 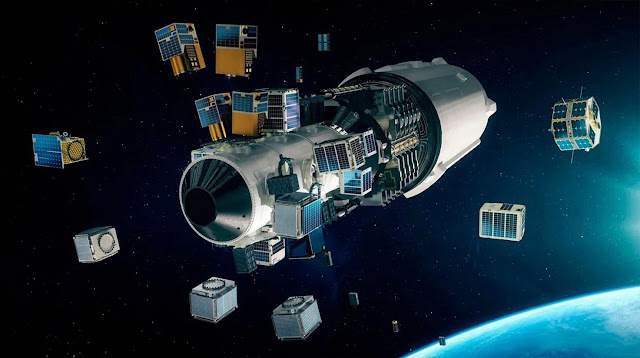 Artist's concept of the satellites being deployed, but it's probably not exactly what the payloads look like.

The booster is B1060 and this will be the eighth flight for that booster.  There are reports B1060 will fly a rare return-to-launch-site (RTLS) landing on the cape, implying that its payloads may be substantially lighter than Transporter 1.


The "not so routine" story is about Elon Musk himself.  As CEO of both Tesla and SpaceX, Musk puts on a lot of miles in a year.  Musk has mentioned that he now lives in a ~$50K house at Starbase, Texas when he needs to stay in Boca Chica for a while.  RGV Aerial Photography (who does weekly or more frequent flyovers of the facility and posts them to YouTube) provides this portion of one of their photos.  The red arrow marks his little (400 sq. ft.), prefab house. 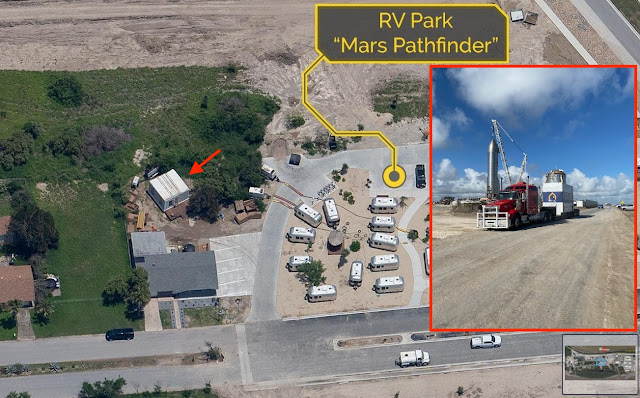 Teslarati recently received a tip noting that Elon Musk’s housing unit in Starbase, Texas is a Boxabl Casita, a foldable, prefabricated home designed for quick installations and maximum affordability. A 20×20 unit such as the one that Elon Musk reportedly owns is priced at only $50,000, less than the cost of a Model Y Long Range Dual Motor AWD. The Boxabl Casita is durable, too, being made of concrete panels and steel. It could be installed very quickly and transported easily, as well, with the home being light enough to be pulled by a vehicle like a Model X.
...
The Boxabl Casita is designed to be customizable with different finishes and configurations. Yet a look at Elon Musk’s apparent housing unit in Starbase shows that the CEO only opted for a base unit. Musk did mention that he has installed improvements to the home that would probably make it worth about $69,000 today, but even such an amount is less than the cost of a base Tesla Model S. The Casita is classic Elon Musk in the way that it’s different and practical, though the idea that the 20×20 unit may be home to the world’s third-richest person is very compelling. People with a net worth of $172 billion, after all, typically live in lavish properties.

I thought this was a neat story and rather unexpected.  The area to the right in the RGV photo is called the RV Park (as it shows), where a group of Airstream mobile homes are stationed.  From what I've read, those Airstreams are there for the exactly the same reason as Elon's Boxabl Casita: they're for workers who have to spend some time there at Boca Chica in a temporary assignment.  I suspect those Airstreams, even though smaller, are more expensive than the Casita.

Increasingly, I think the major difference between Musk and many engineers I've met and worked with is that he can buy that $50,000 Boxabl Casita out of pocket, while the rest of us would have to finance it.