What prompted this post is a comment that I noticed in my daily email from FEE (the Foundation for Economic Education).  Newsletter Editor Brad Polumbo starts out saying,

For someone in his position, I was bit stunned by that.  I've been writing about shrinkflation, the combination of raising prices while making the packages smaller, for the life of this blog.  It tends to make the price increases look less bad.  People see they're paying more, but may not notice that the packages have gotten smaller.

One of the tactics companies use to hide inflation in their prices is to sell smaller packages at slightly higher prices, rather than raising the price on the familiar size by a higher percentage.  Ice cream makers shrank their half gallon containers a while back, many other manufacturers, such as Doritos and other chip makers, and candy bar makers followed suit.  A so-called gallon of paint we just bought says it's 120 oz - not 128.  Even Moe's catfood can is 5.5 oz, down from 6.

(Note: that's from a 2010 article.  I removed two dead links, but the two that are there still returned as I'm writing this.)  The UK Daily Mail did a thorough piece on this in 2015.  It's not a new trick, but it's worth watching for. 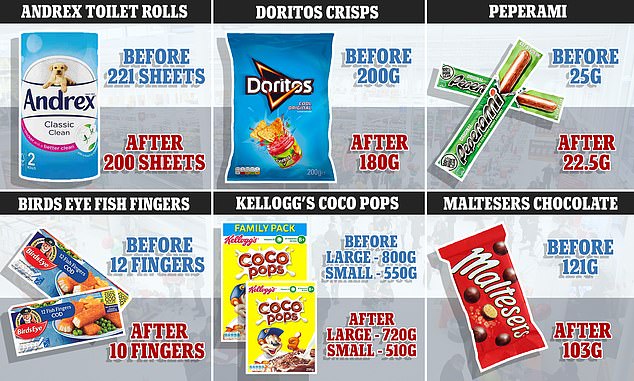 This is an example graphic from the UK, but it's a good example of the things you'll see.  Sometimes you get something like a package sold by the numbers of things in it, like the fish sticks (fingers) at bottom left, and you can see the package says 10 instead of 12.  Paper products: paper towels, toilet paper, and such, will tell you how many sheets per roll.  Sometimes the weight is all you have.