Set Your Alarm for July

Twenty years ago, when I paradoxically used far more of my free time for bike riding than I do now that I'm retired, I ran into a story.  We're talking late 90s and I don't remember if I read it, heard it, or witnessed it, but the story is about two couples in their mid-40s (as I was at the time) riding their bikes together.  The women tended to drift back compared to their husbands and chat, while the guys tended to look at every little hill as a challenge to beat each other to win the climb.  At one point, one of the wives said, "why don't they just whip it out and measure it once to settle things?"

What does that have to do with anything?  It's the story of Jeff Bezos and Blue Origin in a race with Richard Branson of Virgin Galactic.  Thanks to a story at Ars Technica's weekly Rocket Report, I ran into the story that made me think of that.

Back on May 21st, I posted the article about Blue Origin auctioning off seats on the first suborbital flight of their New Shepard manned rocket.  It wasn't until this past Monday, June 7th, that Jeff Bezos announced that he  would be riding in one of the seats and letting his brother Mark ride in another.  The flight will launch from Blue Origin's spaceport in West Texas on July 20, which is the anniversary of the Apollo 11 lunar landing in 1969.

With that fact widely known, we find out that Richard Branson is doing his best to fly on Virgin Galactic's suborbital VSS Unity SpaceShipTwo over the July 4th weekend.  I'm sure it's just a coincidence it will 16 days before Blue origin's flight.  To borrow a quote from Eric Berger, the Ars Technica writer who produces the Rocket Report:

Later, given a chance to do so, Virgin Galactic did not refute this report of an accelerated timeline for Sir Richard. The report said only that the company was still studying its next potential launch date.

Checking the current high bid for the New Shepard seat (or seats) being auctioned, I find it to be $4.8 Million.  Up from $2.8 million in my post (May 21) and up from $3.5 million as recently as this week (I looked within the last couple of days).

The full story on Virgin Galactic's attempt is at the Parabolic Arc story, quoting an anonymous source and giving backup information.

Blue Origin’s May 5 announcement kicked off a five-week auction for an open seat on the flight that is set to conclude with live bidding on Saturday, June 12. The current high bid is $2.8 $3.5 million. [EDIT To Add: $4.8 Million, as above - SiG]

Before it can fly Branson, Virgin Galactic must obtain a commercial reusable spacecraft operator’s license from the FAA. The license would allow Virgin Galactic to fly its billionaire founder as the company’s first spaceflight participant. Under its current launch license, Virgin Galactic is limited to flying employees as test subjects on a non-commercial basis.

Virgin Galactic, which bills itself as the world’s first “spaceline,” has submitted the final two verification reports required for the operator’s license. The company expects the FAA to issue the license prior to the flight in early July, the source said.

If Branson flies before Bezos there will probably be a debate about whether or not he actually made it into space.  The FAA, NASA and the Air Force consider 50 miles (80.4 km) as the boundary of space. The Fédération Aéronautique Internationale – the keeper of aviation and space records – considers the boundary of space to be located at 100 km (62.1 miles), which is known as the Kármán line.  VSS Unity has made three flights above 50 km, but it reportedly cannot reach the Karman line. New Shepard has exceeded 100 km (62.1 miles) on 12 of its 15 flights; the three other flights exceeded 50 miles (80.4 km).

A final, interesting quote from the story, though, kind of stands out.

Virgin Galactic has rearranged its flight test program in order to fly Branson next month. The company had planned to first fly four people to test the experience for future passengers. Branson would have taken the next flight to provide his own evaluation. The final test would include three Italian Air Force officers who would train for a future spaceflight and conduct experiments. 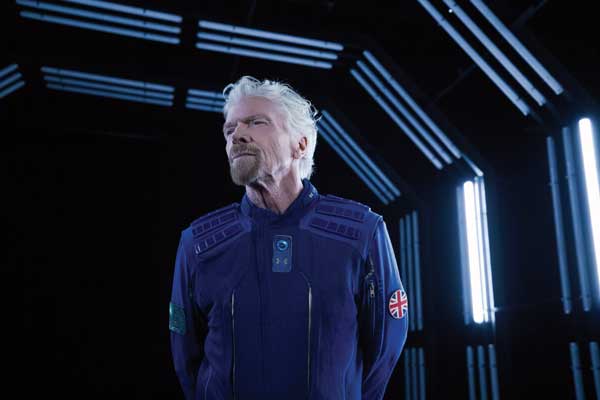 To me, rearranging their schedule like that makes it appear that the story is true.  One billionaire CEO is trying to show up the other billionaire CEO.  If Blue Origin were to suddenly move their flight up ahead of the July 4th weekend to get Bezos into space before Branson, that would add to the story.  I should add that it doesn't seem to be a sure thing that Virgin Galactic could make the flight.  It would be a record fast turnaround for them to fly the mission by July 4th.  That's a 44 day turnaround from their last flight.  They've only done one turnaround for a re-test of SpaceShipTwo and that was 72 days.  Maybe that's a meaningless comparison.  I don't know.