As I sit down to type, the Super Heavy Booster 2 test tank, (BN2.1) that will get the hydraulic ram test we talked about a week ago, is being cryo tested on the test pad at Boca Chica.  It started around 3PM CDT, from what I can tell. 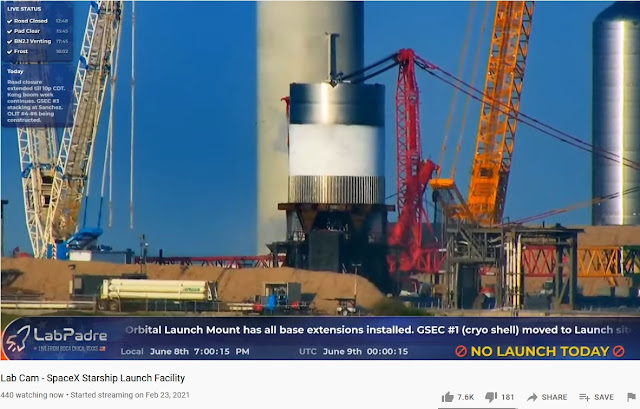 This was news to me this afternoon; the tank has been there for a few days, now, but there were no announced days for any sort of testing.

Until I found that they were testing BN2.1, the big story of the day had to be that SpaceX has completed a dual-bay Starship engine test stand at their McGregor, Texas test facility, and inaugurated the new stand with a Raptor static fire by doing a 15 second Raptor static fire on June 4th.  (Note: there isn't a picture of the static fire on that Twitter link.)

That means that SpaceX’s McGregor, Texas test and development center now has more capacity to test individual Starship engines than the Merlin 1D and Merlin Vacuum engines that power the company’s workhorse Falcon 9 and Falcon Heavy rockets – and less than two and a half years after full-scale Raptor testing first began. SpaceX needs that capacity more than ever before as it shifts its focus from medium-altitude, three-engine Starship production and launches to true orbital test flights with six-engine ships and 29-engine Super Heavy boosters.

Every one of those 35 engines – all of which are expected to be expended after a single orbital test flight – will first need to be qualified for flight via static fire tests in McGregor. As of last month, SpaceX had four separate Raptor test facilities – two horizontal bays, one vertical stand, and a separate bay used for some kind of subcomponent testing. That left Starship in a similar boat as Falcon, which has relied on three vertical Merlin test bays for more than a decade.

They broke ground on the additional test stands at the end of January.  It doesn't say that they're completely done with the test stand, but the fact they tested an engine indicates that they must be close.  That means they went from dirt to a virtually complete test stand in about 18 weeks.  The new stand expanded their test capacity by 2/3. 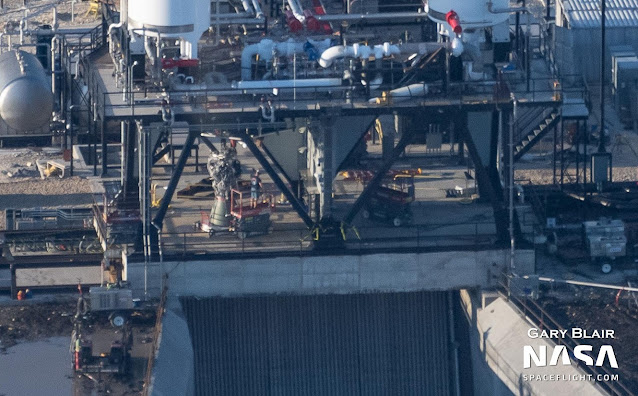 Gary Blair's photo captures a Raptor on the new test stand at left, presumably for a test fitting.  If flight certifying 35 Raptors might have previously taken 5-8 weeks, McGregor can now feasibly complete the same work in 5 weeks - one Raptor test firing per day - and probably continue some level of experimental, product development testing at the same time.

In that article from last week, I relayed the Elon says they're producing a Raptor engine every 48 hours, and I calculated that to build a Starship and Super Heavy booster would require about two months production.  SpaceX must have a backlog of engines that need to be tested.  Has anyone produced engines of this complexity, essentially the power of the RS-25 Space Shuttle Main Engines, at this rate and tested three dozen in 5 weeks?  That's a bit rhetorical.  You don't need to bother answering.