A Ham Radio Series 27 – The World Runs on Quartz

In today’s world of computers everywhere, and trillion-transistor processors, it’s easy to think that the modern world is running on silicon.  It’s true, but there’s an aspect of running on silicon that escapes most people.  Virtually all of those computers, smartphones, and every other gadget we think of runs on silicon dioxide: quartz.  All of those things, and far more than I can summarize, have a clock circuit (so-called because the clock’s timing pulses run everything) with their timing set by a slice of a quartz crystal.

In 1880, two brothers working at the Laboratory of Mineralogy at the Sorbonne, Pierre and Paul-Jacques Curie, discovered that a crystal would generate a small voltage if it was pressed.  They called this the piezoelectric effect, piezo- derived from the Greek piezen, “to press”.  A year later, they showed that if voltage was applied to the crystal, it would change its shape in response.  Through 1915, the piezoelectric effect was a laboratory curiosity studied largely in France and Germany.  Other types of crystals were studied and the effect found in some other materials.

The first use of a crystal for setting the frequency of an oscillator circuit is credited to Dr. A.M. Nicolson working at the Bell Telephone Laboratories in 1918.  Nicolson was using a crystal called Rochelle Salt, because it had a stronger piezoelectric effect than quartz.  W.G. Cady switched to a quartz crystal slice by the following year, and was the first to use quartz.  In 1920, Cady submitted a patent application for a piezoelectric resonator describing possible uses as not just a resonator but also as a filter and a coupler.

With the start of amateur radio in the US, quartz crystal oscillators became a subject of wide experimentation.  The first commercial market for quartz crystals was selling shaped slices of the best mined quartz to hams, who then did the “finish work;” lapping the quartz on grinding plates to set their frequencies, most often in an oscillator in their transmitters.

The history of quartz production and the industry is fascinating.   An area of concentration was central Pennsylvania, near the city of Carlisle (pdf warning), which happens to be the location of the first crystal vendor I was ever sent to investigate and interview.  While the history of the industry and oscillators is interesting, I don’t want to dwell on histories; I prefer to talk about the technical side. A good summary of the history is by Virgil Bottom, here.  Other papers I have on my computer are behind IEEE paywalls and I can't link to them.

Today, natural, mined quartz crystals aren’t used out of the ground.  The crystals are refined and regrown in a hydrothermal process (yes, “hot water;” very hot water).  Quartz crystals have complex geometries, and the ways to cut a crystal to get better properties out of the resulting crystal have been refined over the years.  This figure shows just some of the crystal cuts that are commonly used. 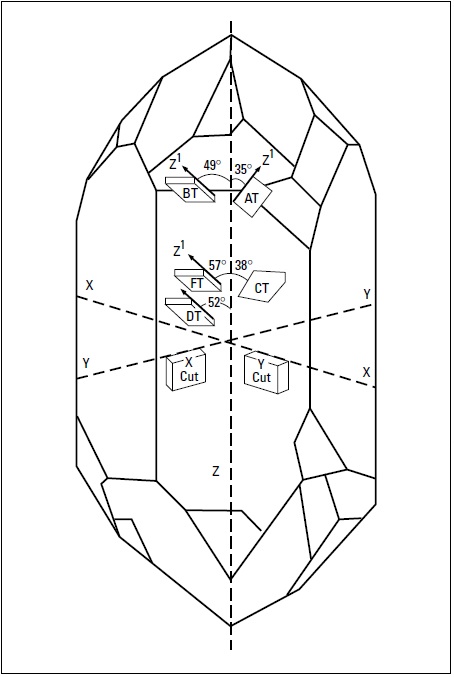 Now compare that short, kinda squat crystal to a lab-grown quartz crystal.  The world market for these is in the billions. 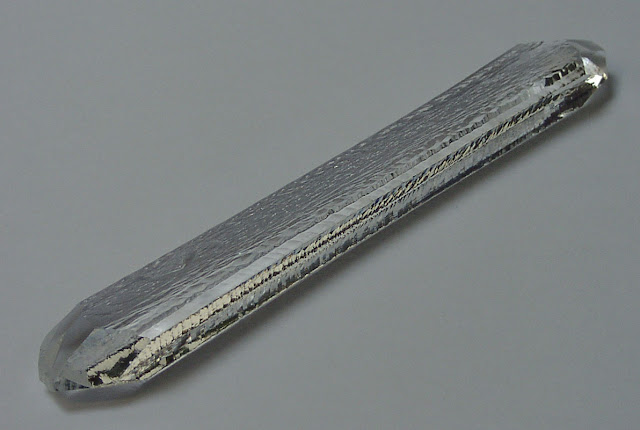 Synthetic quartz crystals are grown in bar form; the position of the crystal before cutting is determined by x-ray diffraction and the crystal is then bonded to a substrate to be cut on.  The cutting is done with a grinding process: parallel bands of steel like a bread slicer that carry abrasives along their edges and the quartz is ground through, resulting in many slices.  The slices are ground into the desired shape (usually round) and then lapped on a plate to frequency.  In the place where I saw this being done, the frequency of the batch of blanks was monitored on a shortwave radio.  As the blanks get thinner, the frequency they’re heard on goes up.  As the final frequency is approached, the abrasives get switched to finer and finer grit sizes.  The sound turns from a growl in the speaker to finer note until it’s becomes like one audio tone.  If the blanks are inadvertently made too thin and too high in frequency, it’s possible to sputter some metal onto the crystal slice, lowering the frequency.  In the 1920s and 30s, hams lapping a crystal on a glass plate with very fine abrasives would rub some graphite from a pencil lead on the crystal to lower its frequency (and they still do it today).

Much as Cady predicted in 1920, quartz slices can be used in oscillators and in filters, and the vast majority of ham rigs out in the world have some quartz in them.  Further, the older and “lower tech” ham stations are, the more quartz they’ll have.  There are literally millions of low power (QRP) ham transmitters that are made from a quartz crystal oscillator and a single transistor amplifier.  Until just before I got my first ham license in 1976, Novice class licensees were required to use quartz crystal frequency control.  The majority of VHF/UHF “handie-talkies” used a pair of crystals for every channel the user wanted.  Quartz crystal filters for adjacent channel suppression are still used in many receivers.  Only the most advanced of modern receivers can substitute software defined filters that exceed the performance of good crystal filters.

Crystal oscillator design is a wide and deep topic.  Any topology of oscillator can be built with a crystal resonator in it.  This chart (from a presentation by John Vig that runs over 300 pages), shows where a crystal (in blue) would be in the various circuit types. The red triangle is active device, with the B and C pins corresponding to a bipolar transistor's base and collector. 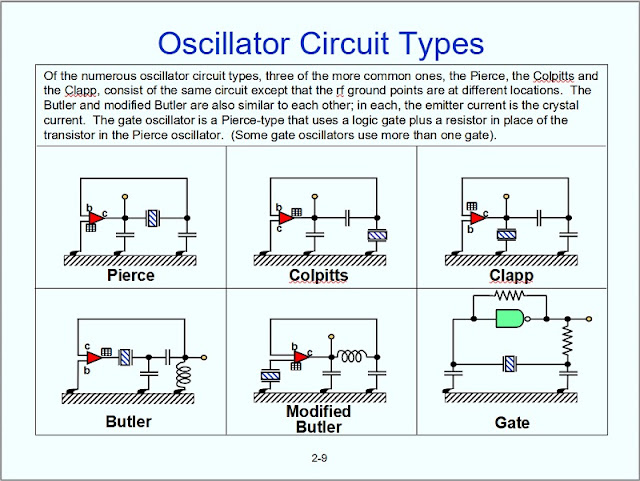