Back in January, I posted my first article on the 3D Printer I had bought and had just assembled.  A few days ago, I received a comment and question about the post that I thought was worth writing a longer, more complete answer to than a comment on a five month old post warranted.

Its been about six months since you have purchased a 3D printer and I’m wondering if your experience with this Creality model has been up to expectations and if not perhaps you can elaborate on its shortcomings. I am considering adding a 3D printer to the shop, and have just begun evaluating machines in the $200-$500 range.

In Internet time, posts that are more than a few weeks old are ancient history.  They can be found with the right search terms, but most readers don't do that.  I'm positive that a new post will be found by more readers than a comment to the five month old post. 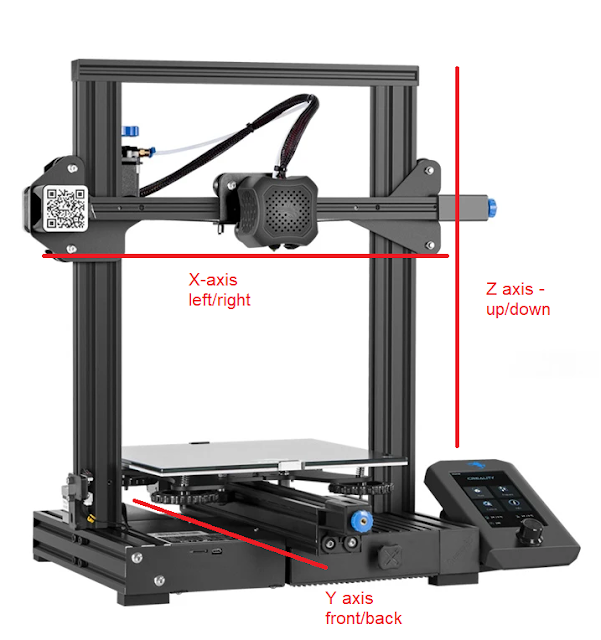 The Creality Ender 3 V2.  Photo from their product page with my markups.

To begin with, the overall answer is that I think the Creality Ender 3V2 is a good entry level 3D printer.  I'm relatively certain that there are better entry level printers, but those are at higher entry price levels than this one.

I don't have a matrix of characteristics of a printer and how I'd rate this.  Overall, I don't consider it a perfect 10, but it's definitely in the upper quartile.

It was easy to assemble and get going.  I only made one mistake assembling it, allowing one of the toothed drive belts that drive the axes to wrap into a wrong position and seem mysteriously too short.  The instructions that come with the printer are adequate, but one of the advantages of a popular line like the Ender printers is that there are frequently videos that cover assembly and add some tips to watch out for.  I watched this one from CHEP a couple of times, including having it on my iPad while assembling it as well as at least one more I can't think of.  Since I've built three different CNC systems, this might be "home field" for me.  Others might puzzle over it more.

Another positive aspect is that it includes everything you need to print your first few things.  It came with 500 grams of PVA filament and I still have plenty left.  I ordered some PLA+ just based on hearing it's “better,” but I really can't tell a difference.  With three spools of that, I'll be printing in PLA+ for a while.

Leveling the bed was relatively easy to do and (again) there are lots of videos to help you out.  (I talked a little about getting it running HERE.)  Likewise, setting the printer nozzle to bed gap wasn't difficult.

Creality has good online support and does issue software updates.  I've never contacted them for any real support.  Another good thing is that the printer is so popular, there are many options for the Slicer software, not just the software that comes with it.  I'm currently preferring the Prusa slicer, from the printer manufacturer by that name.  Josef Prusa is one of the big guys in the open source printer movement and his company's printers are very well regarded, but rather higher priced.  One reason is that the Ender only speaks metric.  The Prusa software will take a mechanical .STL file in English units and convert dimensions to metric for me.  It's not hard to take existing inch-unit files and convert them to mm, it just takes time and adds files to my system.  Which is what the other slicer I was using (Cura) made me do.

What do I wish was different or better?

There is one supplied interface to the printer, a controller on the right side and that controller has one input, a rotary step switch, which I just gotta know is a limited life item.  Try spinning it on temperature, or telling it to move one of the axes with each knob click moving it 0.1 mm, and you know it's limited life.  With my CNC machines, I can go to the computer and tell the CNC mill to go to a specific set of coordinates for each axis, or all four simultaneously, and it will do so.  I can't do that with this printer.  The CNC controllers store a number of steps per inch which can be verified using a dial indicator.  I can check those numbers and change them if need be.  There's no equivalent way to walk up to the printer and control it that way.

As a general rule, the Slicer software does that, but the complication is that each brand, and even each color of each brand filament can require different calibrations in the Slicer software, or different numbers of steps per mm in the equivalent of the CNC controller.  That's the nature of what you're working with and the process itself.

The printer has a USB port on it, and it's possible to interface to the Ender through that.  Controlling the printer through that port apparently gives you more power over the machine; the software that's most popular is called Pronterface and runs on a Raspberry Pi.  I originally dismissed this because of lack of space near the printer for a keyboard and monitor, but I rearranged the shop a few weeks ago and may be able to put something together that works.

While I've never printed anything that challenges the print envelope (about 8-1/2" square by 9-3/4" tall), I'd like to be able to print bigger things.  Printer price scales with change in print size; bigger costs more.

I've shied away from updating the software because there's no way of knowing which boards I have (and which version of the update to download) without opening the printer, which isn't very easy.  The controller software should tell you that information.  I'll open it, take some pictures and write a tag to put on the bottom.

The usual question is "would you buy it again?" and yes, I would.  I've read or heard a bit about newer printers and there are printers that they say are just as good and cheaper.  CHEP has a video about the Elegoo Neptune 2 printer which he says is $169 and just about as good.  That's about $100 less than I paid for my  Ender 3 V2.  Another good video source, Thomas Sanladerer, says they're good printers but nobody has any.  I've never looked.


Like my milling machines, I expect that I'll keep upgrading this one and may end up with one that has a bigger print envelope sometime in the future.