D-Day And the Gettysburg Address

I'm finding myself late to commemorating D-Day, seventy-seven years ago today.  Another little voice paying tribute to those boys and men who went ashore that day isn't even a whisper in the wind, but it's all I have.  I learned today from Larry over at Virtual Mirage that "Very few in those first few waves that hit Omaha Beach lived the next two weeks. Well under 10% survived the war."

I have no family connection to D-Day and not much to WWII.  My father was disabled in a training accident, and while he was scheduled to have gone to Europe as a tank officer, was in a body cast for months before being discharged for medical reasons.  I've known people who went to Normandy for various reasons over the last 20 year, and they always tell the same story.  Despite the reputation of the French for not being very pro-American, the people who have been there have always said they were greeted with thanks by the locals of Normandy.  The American Cemetery in Normandy, France, displays 9,386 gravestones of American soldiers from the D-Day campaign; the beginning of the inch-by-inch fighting across the continent to win the war.


But, in a larger sense, we can not dedicate -- we can not consecrate -- we can not hallow -- this ground. The brave men, living and dead, who struggled here, have consecrated it, far above our poor power to add or detract. The world will little note, nor long remember what we say here, but it can never forget what they did here. It is for us the living, rather, to be dedicated here to the unfinished work which they who fought here have thus far so nobly advanced. It is rather for us to be here dedicated to the great task remaining before us -- that from these honored dead we take increased devotion to that cause for which they gave the last full measure of devotion -- that we here highly resolve that these dead shall not have died in vain -- that this nation, under God, shall have a new birth of freedom -- and that government of the people, by the people, for the people, shall not perish from the earth.  [BOLD added - SiG] 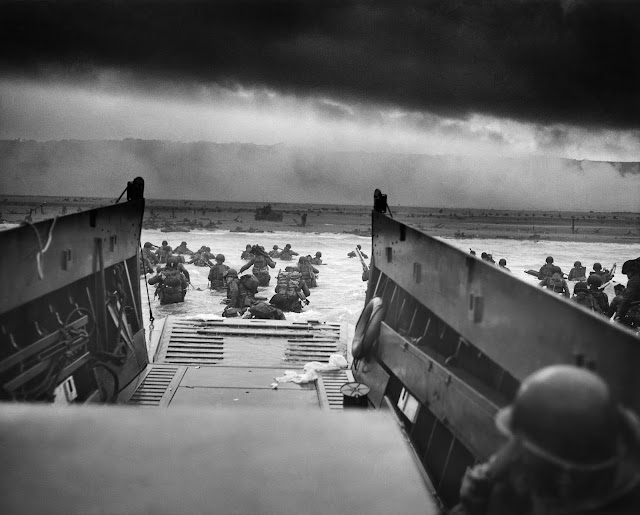 Lincoln tells me not to just honor these guys' memories, but to fight to make sure the forces of evil and stupidity don't destroy everything they fought for.  I don't think there has been a time since Normandy when the "forces of evil" seemed as close to their goals in this country as they do now.

EDIT 060721 1321 EDT:  Corrected the opening sentence to “seventy-seven years ago today” from seventy-six; thanks to comment by Dan Kurt.  (It's embarrassing to say I mentally added "2+75" and didn't get the right answer!)

Posted by SiGraybeard at 5:57 PM