Item 1:  the plan to transport drone ship OCSILY to California on the Mighty Servant is moving ahead.  Photos were taken of the barge loaded on the giant transport ship (the ship shipping ship) on Saturday morning. 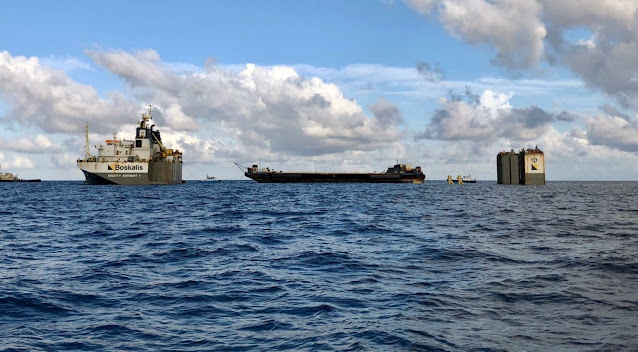 You may have gathered I think this is pretty cool technology, although I know it's not new technology.  The ship builder, Royal Boskalis in  the Netherlands has a technical brochure you can download on the ship (bottom of this page: it's a .pdf).  An interesting fact is that Mighty Servant 1 was built in 1983; so she's 38 years old this year.

You probably remember the bombing of the USS Cole in October 2000.  The Cole was brought back to the US from the attack in Yemen onboard a similar ship called the MV Blue Marlin; the Mighty Servant (MS1) made me think of this and look up the details.  Blue Marlin was built in 1999, so MS1 was 16 years old when Blue Marlin went into service.

You can probably predict the path it will follow yourself, but SpaceXFleet presents this map. It appears that using the MS1 can drop the transit time approximately in half. 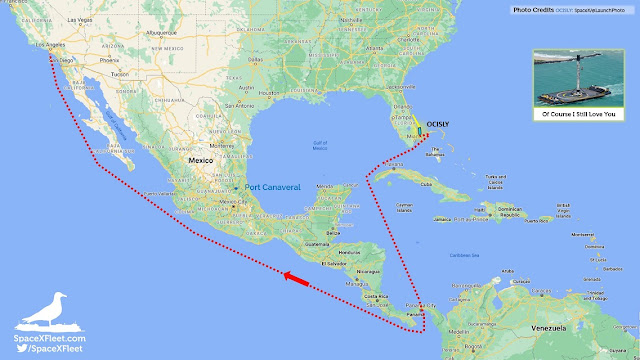 Item 2: The final bid for the seat with Jeff Bezos and his brother Mark was $28 million.  The last minute bidding frenzies that you've seen and experienced on eBay took place at Blue Origin.

The identity of the winning bidder has not yet been made public but will be revealed in the coming weeks, Blue Origin said.

Whoever it is will be traveling with three other passengers, including Bezos and his younger brother, Mark. The “fourth and final” passenger will be announced soon, the company said.

At approximately 10 minutes from launch to landing, around three of which will be spent in zero gravity, the trip will cost the winning bidder more than $9 million per minute spent in space.

As has been announced before, the winning bid will be donated to Club for the Future, Blue Origin’s foundation focused on STEM education programs.  Bezos is scheduled to step aside from his spot as CEO of Amazon on July 5th; as of the moment, the flight is set for July 20th.

Item 3:  The third section of the Orbital Launch Integration Tower (OLIT) has been stacked at SpaceX Boca Chica.  That means it's about halfway built.  The fourth section to stack is waiting alongside the test stand now and will probably be put in place tomorrow or the next day, while a fifth section is being built at the shipyard.

SpaceX currently has permission from the FAA to build a tower 143m (469 ft) tall – technically 146m (479 ft) after the installation of a small lightning rod.

To get from 400 feet to that ~470 ft tall permit, implies a seventh section will be starting its assembly any minute now (status board).  There's a rush to get this system built because of Elon's promise to launch an orbital Starship in the "third quarter."  That third quarter clock starts ticking on July 1st. 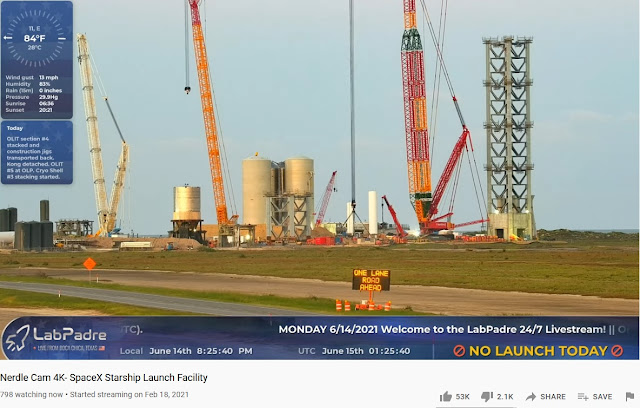 The current OLIT is on the right in this screen capture.  You can see the taller base section and the three identical structures on top of that base.  The next tower section doesn't jump out in the picture, but it's in front of the large towers close to the center.