An Enticing SpaceX Rumor from the Best-Placed Source

Ordinarily, we refer to rumors from "a well-placed source" or anonymous sources.  This is a rumor about SpaceX from the best-placed source there can possibly be: Elon Musk.

A couple of days ago, Starship prototype SN16 was removed from the launch pad area and moved out front where SN15 is sitting, prompting reports that it was going to be retired because it's stated purpose in life is no longer needed (to do the tests SN15 was supposed to do if SN15 failed). 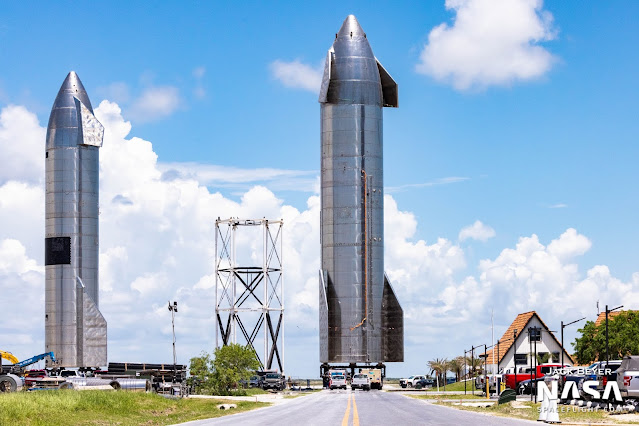 SN15 (left) and 16 being transported over to join 15.  Photo credit Jack Beyer for NASASpaceflight.com.

In a reply to a Tweet by Teslarati news, Elon said, "We might use SN16 on a hypersonic flight test"

Now this is interesting.  No Starship prototype has even gone supersonic (it has been carefully planned that way), and all Starship flights have been repeats to the same modest altitude.  A little more pointedly, the prototypes have apparently all achieved their maximum velocity during their free fall, not while under rocket power.

Musk’s use of “hypersonic” implies that Starship SN16’s hypothetical flight test would reach a velocity at least five times the speed of sound (~1700 m/s or ~3800 mph) – at least a full magnitude faster than the next fastest Starship prototype. Based on the SpaceX CEO’s comment, it’s also safe to assume that Starship can reach hypersonic velocities under its own power – and likely only with three Raptor engines installed.

This sounds like it would be a good test to make.  The first orbital Starship launch could come by the end of July, and no part of the stack has done what the real vehicle will need to do.  Tests are always a good thing but, at some point, adding more tests just slows them down.  It would probably take a minimum of a couple of weeks to get SN16 into the pad area and run all the tests required before it could take a hypersonic flight and that could push the orbital launch out.

Here's the deal: no matter how they envision it, the first vehicle to go hypersonic is their hypersonic test.  It could be SN16 by itself or it could be SN20 riding the Super Heavy booster, as part of its orbital test. The first one is always a prototype - no matter what you call it.