Interesting stuff for a company that hasn't made their first launch yet, but Relativity Space announced they've raised another $650 million in capital, with the intent to begin development of their Terran R (for reusable), a rocket in the payload size class to compete with Falcon 9.

The last post I did about Relativity was back in April, saying that their 3D Printed rockets are looking like the real deal.  At that time they had talked about the Terran R but were involved in working out the details of their Terran 1 rocket.  This is the concept rendering of the Terran R.  Seems more reminiscent of the Starship system than the Falcon 9 to my eyes. 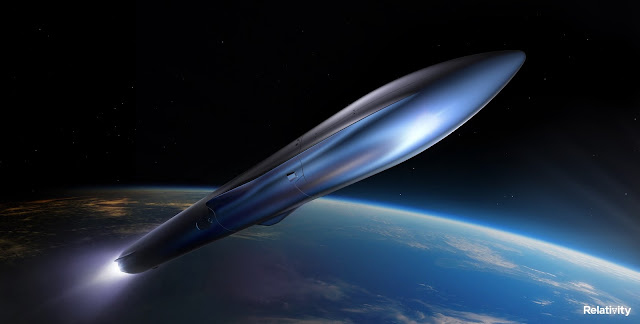 The new funding will accelerate development of the "Terran-R" launch vehicle, Relativity Chief Executive Tim Ellis said in an interview. This large orbital rocket will be about the same size as SpaceX's Falcon 9 rocket. However, Ellis said, the entire vehicle will be reusable—the first and second stages, as well as the payload fairing. And it will have the capacity to lift 20 tons to low Earth orbit in reusable mode, about 20 percent more than a Falcon 9 booster that lands on a drone ship.

With the Terran-R vehicle, therefore, Ellis said Relativity Space aspires to not just match the remarkably capable Falcon 9 rocket but to exceed its performance.

"We're trying to ice skate to where the puck is going," Ellis said, adding that Relativity wants to be similarly disruptive to SpaceX, but in its own way. "What we keep hearing from customers is that they don't want just a single launch company that is, frankly, the only quickly moving, disruptive provider."

It seems like another example of "imitation is the sincerest form of flattery" when you add in that CEO Tim Ellis and his co-founder Jordan Noone are fans of SpaceX and Elon Musk.  They founded the company five years ago, around the time SpaceX started regularly landing boosters for reuse.  They were drawn to the technology and Musk's stated desire to create settlements on Mars as a step to making mankind a multiplanetary species.

"I was inspired by SpaceX landing rockets and docking with the space station," Ellis said. "Yet despite all of that success, we realized that there were two core issues." Those issues were a lack of planning for how to live on Mars and a space industry still using labor-intensive practices.

"In every SpaceX animation, we saw a fade into black right when people walked out of the rocket on Mars," Ellis said. "So what was clear [is] that there needed to be some other company building humanity's industrial base on Mars. Replicating the infrastructure for a million people that live on Mars is a massive undertaking, and I think a lot of people need to work on it."

Ellis says it wrong to compare the Terran R to the Falcon 9; it's more like a smaller version of Starship and the Super Heavy booster.  Terran R will have nowhere near the lift capacity of Starship.

"To my knowledge, we're only the second fully reusable vehicle other than Starship that's even been planned," Ellis said.

All the aspirations aside, Relativity still hasn't made orbit.  While they report good progress on the smallsat class Terran 1, 1.25 metric tons to low Earth orbit, they haven't announced a launch date more precisely than "before the end of this year."  The company reports they have already printed 85 percent of the first Terran 1 flight rocket, including the first and second stages.  Relativity says they will ship the second stage to NASA's Stennis Space Center in Mississippi "toward the end of summer" for hot fire tests. The company's launch site from the Kennedy Space Center is due to be activated early this fall.

I'll be watching their progress.