Back when I was still working, Mrs. Graybeard and I would have lunch together on Fridays.  There were always places to get chicken wings for lunch near where I worked, and having wings once a week became something we just did.  After I retired, it transformed into watching a TV show or two we'd record during the week over wings on Friday nights.  Ordinarily, we'd get over a dozen whole wings to cook for dinner and whatever we didn't have for dinner became my lunch on Saturday.

Around the time that COVID shutdowns started happening, wings started becoming scarce and hard to find at times and we had to do without.  When they started being available again, I jokingly referred to having a "strategic reserve" of wings in our big freezer, but I don't think we ever had any more than two packages in the freezer.

If you'll recall, last year the problem was attributed to there being a large institutional demand for wings as opposed to the cuts that most people would buy for home use.  The price of wings collapsed and many were thrown away when the college bassetball tournament they call "March Madness" didn't get held.

This year, the supply started out good but then tightened up quite a bit.  The reasoning looked like it should be the same because there was no shortage of any other chicken parts.  I could walk into the meat section of the local grocery store and find dozens of packages of drum sticks, thighs, and chicken breasts, either boneless/skinless or still on the ribs.  Last week was the first week in a month when there was one small package of wings (about half of what we'd normally buy) and here's the strange part: a package of drumettes, the uppermost portion of a chicken wing.

This started to get on my nerves.  After all, chickens have exactly the same number of drumsticks, thighs and breasts as they do wings; why should those be so commonly available that the store regularly does a BOGO (buy one, get one free) on those parts, but have no wings?  Some research said that the wing restaurants were having problems getting their wings, too, and that wholesale prices for them have doubled.  Small sports bars and other restaurants that sell wings are being pinched by the prices for wings and labor going through the roof - although I bet you only heard about the labor costs.

This led to some web wandering to find out why are wings so scarce. I was surprised that Tyson, the chicken processing giant, was saying it was that their roosters weren't living up to their "job responsibilities."

Could it be the 21st century soy boy problem has moved to the chickens?  Are they feeding the roosters too much soy?  Tyson says no; they simply bought a new breed of Rooster that's supposed to produce meatier offspring, but apparently bought a sales story instead.  They promise things will be better Real Soon, Now.

While doing my research, I stumbled across a story that might solve the situation, if we can just make something happen.  Some people in various places (cough - China) started rumors that KFC had bred chickens with spiders to produce chickens with eight legs and six wings.  Since drumsticks aren't in short supply, could it be possible to breed a chicken with more wings?  Not necessarily six wings, although I don't see a problem with that.  Clearly just doubling the number of wings to four would double the production of wings in the country while not oversupplying the parts there are already plenty of. 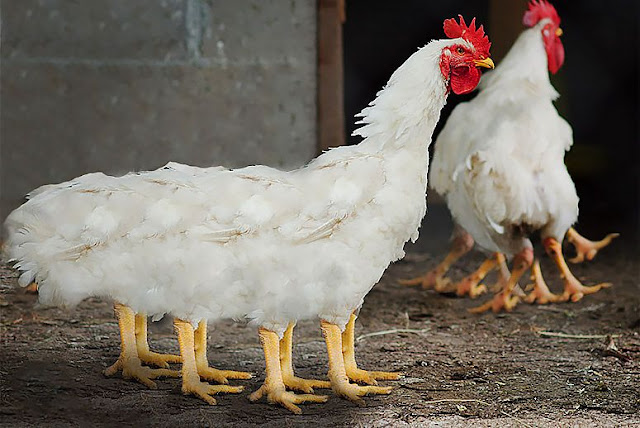 Now you and I know that you can't crossbreed spiders and chickens.  First off, there's the enormous genetic differences, and then there's the practical issue that they're too different in size to mate.  With the exception of some of our Florida spiders who could probably do it while standing flat-footed on the ground.  Why were there never any murder hornets in Florida?  The mosquitoes raped them and left them for dead.

But what if you could isolate genes that determine the number of limbs, and somehow get a healthy chicken with more wings?  Like I said before, they don't need to have six wings because four would double the national supply of wings.

Now I know what you're thinking.  Everything you buy in the store advertises it's not genetically modified and here I am proposing that we extract genes from a spider to modify the chicken genome and get more wing production.  I have a theory for that, too.  I think that GMO is a "Karen" word (sorry, Karen, I know you don't like being associated with that) and that the people who go to a sports bar to watch a game, drink a few beers and have a few wings are a completely different group from the people that live in fear of GMOs.  I think that the two groups have virtually nothing in common.  Like this is the Venn diagram of the intersection between the two: 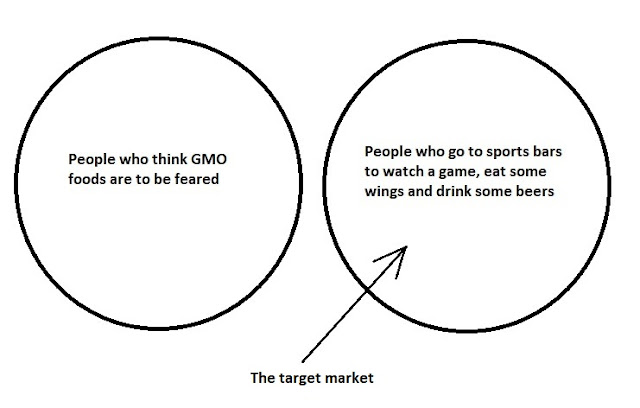 Darn it!  Now I want some wings.