At Cornell University, in the Kavli Institute at Cornell for Nanoscale Science where they're still  dedicated to reality, a team led by Dr. David Muller has designed a new way of imaging individual atoms. The story comes from the Digital Photography Review newsletter.

The team's paper, 'Electron Ptychography Achieves Atomic-Resolution Limits Set by Lattice Vibrations,' outlines a new electron microscope pixel array detector (EMPAD) that includes more sophisticated 3D reconstruction algorithms. The combination of the EMPAD and algorithms is so finely tuned that the only blurring of atoms in the image is due to the atoms' 'thermal jiggling.'  [Note: the link is to the paper on AAAS Science magazine's website.  You must have an account to read it.]

The calculated magnification is over 100 million times.  Since "a picture is worth a thousand words," let's go there first.  Each bright spot in this picture is an individual atom.  You can see bright pairs and single, dimmer individual atoms.  The material is an obscure compound, praseodymium orthoscandate (PrScO3), which I assume was chosen for some property they thought would increase the chance of success. 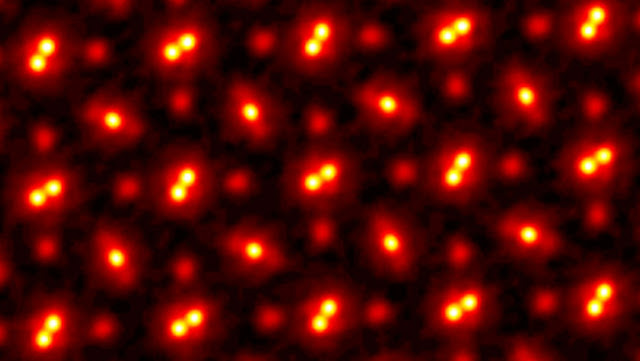 So what are they doing here?  To begin with, these are not optical photos; the atoms and molecules are so much smaller than a wave of visible light that light doesn't interact with them like it does with bigger things.  These are the results of the electric fields measured by a special probe, much like the Scanning Tunneling Microscopy photographs of atoms that first made headlines in the 1980s.  (A very unexpectedly named post from 2010 that has photos of individual atoms in it.)

'Ptychography works by scanning overlapping scattering patterns from a material sample and looking for changes in the overlapping region,' said David Nutt of Cornell University. 'We're chasing speckle patterns that look a lot like those laser-pointer patterns that cats are equally fascinated by,' Muller said. 'By seeing how the pattern changes, we are able to compute the shape of the object that caused the pattern.'

Whereas traditional photographers typically aim to achieve perfect focus, when capturing images to atoms, it's better to have the EMPAD slightly defocused. This allows the team to capture a wider range of data, which can then be reconstructed via complex algorithms to create a final, precise and sharp image. The image is precise down to one-trillionth of a meter, or a picometer.

'With these new algorithms, we're now able to correct for all the blurring of our microscope to the point that the largest blurring factor we have left is the fact that the atoms themselves are wobbling, because that's what happens to atoms at finite temperature,' said Muller. 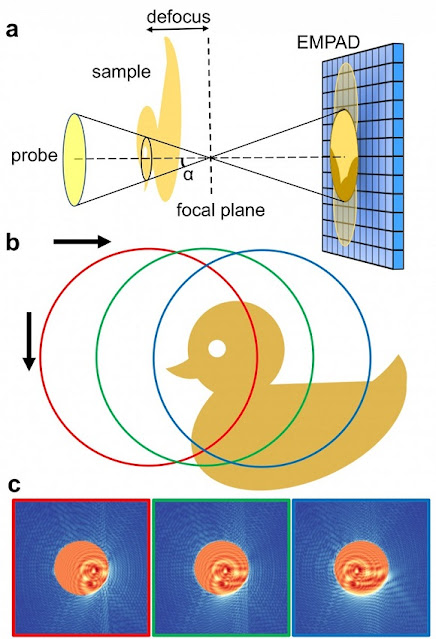 In 2018, researchers at Cornell including Dr. Muller, built a high-powered detector that, when combined with ptychography, captured an image of atoms at triple the resolution of a state-of-the-art electron microscope. Three years later, Muller is leading research with this EMPAD detector, breaking their previous record magnifications.  'This doesn't just set a new record, it's reached a regime which is effectively going to be an ultimate limit for resolution. We basically can now figure out where the atoms are in a very easy way.'

Final words to the source article on DPR.

The team's imaging method has possible applications outside of academia. Being able to locate individual atoms in three dimensions could prove useful when searching for impurities in semiconductors, catalysts and quantum materials, such as those used in quantum computing. The imaging method could be used on biological cells or tissues, perhaps even synapse connections inside the brain.

Muller, who co-directs the Kavli Institute at Cornell for Nanoscale Science and co-chairs the Nanoscale Science and Microsystems Engineering (NEXT Nano) Task Force, says, 'We want to apply this to everything we do. Until now, we've all been wearing really bad glasses. And now we actually have a really good pair. Why wouldn't you want to take off the old glasses, put on the new ones, and use them all the time?'