Since Trump's announcement intending to institute tariffs on steel and aluminum hit the news last week, the media has been full of bloviating on the subject.  Whatever you believe you'll be sure to find someone to advance that idea.  As a "live and let live" kind of guy, my default is that there shouldn't be tariffs, that trade should be fair and open.  At this point in time, that's so far away from the reality we live in that making the world's markets fair and open makes returning to a liberty-oriented, self-determining society with a tiny Federal government seem like a trivially easy task.

The reality of the world in 2018 is that every nation drives everything they can possibly drive to favor themselves: they manipulate currency, they protect their industries, and they tax to try to create advantage.  Not that it's a particularly new condition in 2018.

The Woodpile Report (yes, I skim it, though usually over my wife's shoulder) had a link to an interesting blog I've never been to, Don Surber with the provocatively named post, "We Already Have 12,000 Tariffs".  It's a good start.


To hear Never Trumpers (and a few Trumpkins) tell the story, Donald Trump is the first president since Hoover to impose a tariff on imported products.

But Gus Lubin of Business Insider in 2010 reported, "The International Trade Commission lists over 12,000 specific tariffs on imports to America. Hundreds of agricultural, textile, and manufacturing items are highly protected. So are obscure items like live foxes."
...
From a 4.8% tariff on live foxes to a 350% tariff on tobacco, America protected its industries in 2010. ... We slap a 131.8% tariff on unshelled peanuts. With shells, the tariff is 163.8%. Imported French jam, chocolate, ham, European meats, truffles, and Roquefort cheese ...come with a 100% tariff. [Note:  I played a little loose with his quotes here.  When it doubt, RTWT - SiG]

Whenever I look at the New York Times, and especially economics writers like Thomas L. Friedman, I refuse to automatically grant them any credibility that I wouldn't grant anyone else just because it's the Times.  It's like reverse Gell-Mann amnesia; I remember all the crap they've spread before and automatically consider them less credible.  But from the "if it happens less than 5% of the time it's probably a random event" category, Friedman seems to be right in this piece from today, "Some Things Are True Even if Trump Believes Them".  Friedman reluctantly, even backhandedly, opens with this paragraph:


One of the hardest things to accept for all of us who want Donald Trump to be a one-term president is the fact that some things are true even if Donald Trump believes them! And one of those things is that we have a real trade problem with China. Imports of Chinese goods alone equal two-thirds of the global U.S. trade deficit today.

You can sense it's painful for him to admit Trump might be right about anything, but it's true.  In the game of international trade and tariffs, the US has been a patsy.  For instance, an American car imported into the EU pays a 29% tax (19% VAT + 10%) ; the same American car going to China pays 25% import duty, but a car from the EU or China coming to the US only pays 2.5%, a minimum of a tenfold difference.  Is that fair trade/free trade?  It certainly favors the other countries.  Add to that this tweet from Elon Musk, who also points out,


Also, no US auto company is allowed to own even 50% of their own factory in China, but there are five 100% China-owned EV auto companies in the US.

Friedman talks about a conversation with David Autor, an M.I.T. economist who’s done some of the most compelling research on the impacts of China trade.


Autor and his colleagues David Dorn and Gordon Hanson found in a 2016 study that roughly 40 percent of the decline in U.S. manufacturing between 2000 and 2007 was due to a surge in imports from China primarily after it joined the W.T.O. And it led to the sudden loss of about one million factory jobs in Ohio, Michigan, Wisconsin and Pennsylvania. Trump won all of those states.

This “China shock,” said Autor, led not only to mass unemployment but also to social disintegration, less marriage, more opioid abuse and more people dropping out of the labor market and requiring government aid. “International trade creates diffuse benefits and concentrated costs,” he added. “China’s rapid rise, while enormously positive for world welfare, has created identifiable losers in trade-impacted industries and the labor markets in which they are located.”

While I respect National Review, their headline screamed "600 Non-Steel Jobs at Risk for Every Steel Job"last week.  That means for the 90,300 jobs in the steel industry, tariffs put 54.18 Million people at risk.  Along with Don Surber, I question their algorithm.  They don't seem to give any thought to people whose employment status is dependent on a nearby steel production facility.  There is a multiplier effect.


Steel jobs bring more jobs in other businesses. The Wall Street Journal had an old school story about Granite City, Illinois, where the U.S. Steel plant is re-opening.

"Not only were hundreds of steelworkers left jobless when United States Steel Corp. scaled down its operations in Granite City, Ill., in 2015, but lunch deliveries to the plant vanished for a local diner while a shoe store’s work-boot sales plummeted. At least 26 businesses closed within a year, according to an area chamber of commerce," the Journal reported.  [Note: Paywall]

It's important to underline that this isn't all about cars, because steel and aluminum are used in so many things besides them, from furniture to houses to beer cans and disposable cooking pans.  Are tariffs on aluminum and steel a good thing?  In a perfect world, no.  But this is far, far from a perfect world.  Trump campaigned on how badly current trade conditions (and formal agreements like NAFTA) have put us at tremendous disadvantages.  I'm under no belief that trade wars are "easy to win", but I don't think it's Armageddon, either.  There will be bad impacts and there will be people who lose jobs, but the question is really if it's a net positive for the country and how big a positive it is.  The final results will be known by doing it and measuring the results afterward. 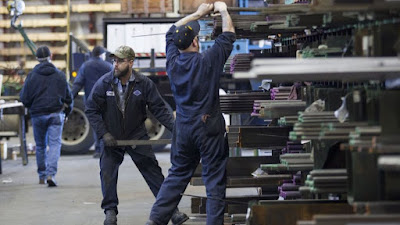