In Honor of Peter Wang

I don't recall where I saw the link to this story, so my apologies for not crediting you, but the story concerns 15 year old Peter Wang.  On the worst day imaginable for a 15 year old in school, he rose up, put aside his fear, put self-imposed duty ahead of his personal safety to save fellow students at Marjory Stoneman Douglas High School.


Peter Wang was a proud member of the Army Junior Reserve Officer Training program at his high school. He dreamed of attending West Point and serving his country in the military. As an ROTC cadet, he received firearms training and was reportedly an accomplished marksman.

He knew how to shoot a rifle and he knew what one can do.

He knew exactly what he was facing when he stood, in his grey and black uniform, in the line of fire and held open the door to his study hall. He herded dozens of his terrified classmates through to safety. He stood there protecting his classmates and saved all that he could till he was shot down.

He died where he stood.

When I first heard the story about Peter, it was in connection with a petition at Whitehouse.Gov asking he be buried with full military honors.  We both signed.  The required 100,000 signatures were gathered with plenty of time to spare.  It turns out that the story reached a lot of hearts and the US Military Academy at West Point, the school he dreamed, of attending did something no one asked.


On Tuesday, West Point tweeted, “One of USMA’s priorities is to develop leaders of character who are committed to the values of Duty, Honor & Country. Peter Wang’s actions on February 14 are an example of those principles & the academy honors his dream of being a West Point cadet with a 2025 letter of acceptance.” [Note: Tuesday, February 20th - SiG]

At 15, I'm guessing he would have been applying to West Point in 2021; 2025 would be his graduating class.  In addition, the US Army awarded Wang the JROTC Medal of Heroism. Peter Wang wasn't the only JROTC cadet who distinguished themself by quick thinking and proper actions.  Zackary Walls and Colton Haab were not mentioned in this article, but were widely reported to have protected fellow Stoneman Douglas students with Kevlar curtains originally bought for the JROTC rifle team.  Cadets Alaina Petty and Martin Duque also received the JROTC Medal of Heroism; both were killed during the attack.  A statement from the Army says:


The Army hopes to recognize other students but in the wake of the tragedy “the immediate focus right now is on supporting the funerals with dignity and honor, so deserved by these Cadets and their families.”

I believe that most of you are as old fashioned as I am in celebrating old cultural values such as the exceptional heroism young Cadet Wang displayed.  I'm sure he was terrified, I know I would be, but he stood his ground and did his best to protect a room full of students that weren't really his responsibility.  In a time in our nation when we can't go an hour without hearing the phrase "toxic masculinity", a 15 year old young man showed us a standard of behavior we can do nothing but admire.  Countries that lose masculine, protective men are soon no longer countries. 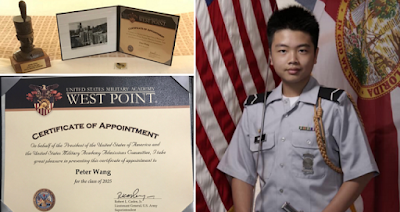