The annual air show is in town this weekend, so I'm spending some time out in the yard watching for whatever flies my way.

The big feature is the Thunderbirds, but there are some other things worth watching.  Early this afternoon, I heard a bit of a rumble outside and said "that's not a regular prop driven plane".  I hopped outside, looked up over the house and grabbed this snap in the two or three seconds I had. 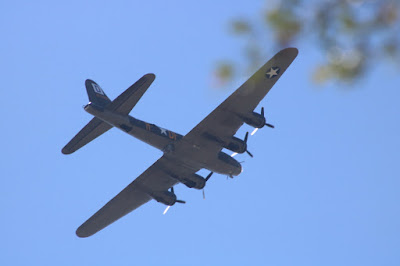 That's the B-17 named Memphis Belle, from the movie by that name.  I've never seen one in real life.

The other headlined airplane that was going to be here was to be a today-only flyby of a B2 Spirit bomber.  Unfortunately, here's where my location about 3 miles north of the runway was an issue.  The bomber did a low flyby heading east over the strip, continued out east (probably offshore) then turned around and flew west over the strip again.  It never really presented anything remotely "photogenic" to me.

Only one or two passable shots of the T-birds. 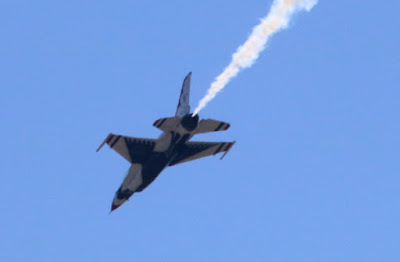 I'll probably try again tomorrow because challenge.  There's a few P-51s flying, Memphis Belle again and the 45 minutes or so of the T-birds.

For the photographers, my lens is a 300mm Sigma budget zoom, and I generally leave it focused at infinity on aperture priority autoexposure in my Canon T6i DSLR.  With the APS-C sensor, that's equivalent to a 480mm lens on a "full frame" 35mm sensor.  I use IS800 allowing me to shoot at roughly f11 and 1/2000 second.   Of course that varies a bit, but I try to push for depth of focus and fast shutter speeds.