News Story of the Day

My favorite news story appears in a few places today, about the restaurant in Toronto that was being protested by militant animal rights activists.  The restaurant is called Antler, and advertises as "local seasonal and wild foods such as bison, boar, rabbit, duck and deer."

Although they don't serve game animals that they've hunted themselves, the practice is illegal according to the Toronto-centric blog, they make an effort to provide food with all the buzz words that are going around these days: locally sourced, free-range, ethically farmed and foraged*.  When the protesting began, co-owner Michael Hunter was nice to them, even changing one featured menu item from a goose dish to a vegetarian dish. 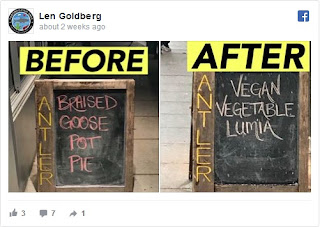 As you might expect, a concession didn't appease the protesters, it made them feel as if they won a battle against the restaurant, so they arranged to come back.  When the protesters returned for the fourth time with signs bearing messages like "animals are not ours to use,"  "killing and eating animals is horrifying" and "MURDER," Hunter decided to conduct a little protest of his own.


About an hour into their demonstration, protesters say that the restaurant's co-owner and chef, Michael Hunter, "brought out an entire animal leg and started cutting it up right in the window on a table reserved for diners."

Event organizer Marni Jill Ugar wrote later that night on Facebook that she felt Hunter had been "taunting" the group by cutting up a deer leg right in front of them.

"Once the deer was cooked Michael Hunter, owner of Antler, sat back down at the window to eat the dead deer," she wrote.  [Facebook warning: SiG]

During the time when Hunter was cutting up the venison leg in the window, Toronto police showed up, although no source says why.  The police and Hunter are seen talking in the window, and then walking away with each other, all apparently smiling and getting along well. We don't know what they talked about or why they left the window area, but one the protesters was quoted as saying, "I'm not sure if the police were telling the owner to stop for trying to anger the protesters, or for ethical or health & safety violations,"  It's also possible the preparation was done and it was time for him to go to the cooking area.


Asked for comment, Hunter told BlogTO by email that "our identity as a restaurant is well known throughout the city as is our ethical farming and foraging initiatives." He added: "While we would much rather not be the focus of these protests, we are not at all surprised. We simply want to carry on running a restaurant and have a peaceful environment where our guests can enjoy their food."

Antler doesn't seem to be hurt by the attention.

In fact, one commenter on the protesters' Facebook page wrote: "Antler is now the hottest restaurant in Toronto thanks to you guys. Congrats." Most -- if not all --of the other commenters on the animal rights activists' forum expressed similar sentiments. 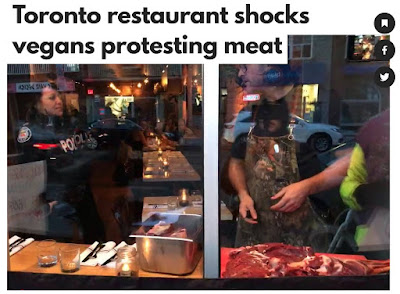 Headline photo from BlogTO, showing the Toronto police officer and Michael Hunter while he was preparing the leg for cooking.

*Author's note:  I don't know what they mean by "foraged" food; like the food critic article talks about a dish with "foraged ingredients".  Does that mean they found them in the dumpster?