Ever since Hillary Clinton's loss in 2016, the left has been in one of their predictable snits about the electoral college system being outdated and needing to be eliminated.  There's currently a petition up on MoveOn.org with over 715,000 signatures.  I'm fairly sure those 715,000 must be the "Resistance" members who took a break from trying to determine their gender long enough to find something else to complain about.  Not to mention that Babs Feinstein says she's going to propose legislation to do away with it (sorry, Babs, it would have to be a constitutional amendment).

My friend Bob, N4RFC, and I talked a little about this by email about this, and he followed that up with a good blog post about why we shouldn't restructure our system to a simple one person/one vote system. It's a good look at just what's at stake.  It's worth your time to look at if you have any doubts about the wisdom of this feature of how the founders structured our country.  He starts out with a fact that a different friend dropped on him.

Much like I would, his first response was to think, "is that right?" and begin looking into it.  He found this map.  The states with less population than New York City are in red. It turns out the statement was wrong, just not by much.  If you count the gray states, you'll find 12 of them, not 10.  That means more people live in New York City than in 38 of the 50 states. 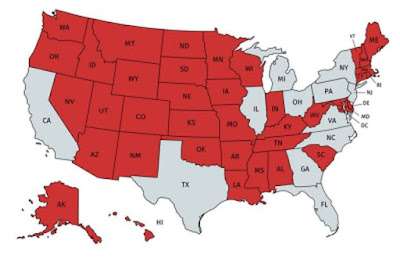 Whether they know it or not (and I assume they do know it), the desire to get rid of the electoral college is a desire to avoid those icky flyover-country people (with their bibles and their guns!) and have candidates just campaign in a few big cities.  Forget having a candidate come to any state that's red in this map, and chances are any Evil party candidate would only campaign in the few largest cities, because those are the most reliably blue places.  I know I've written before that the real division in the country isn't the so-called "left/right", it's big city/small city.

What are the alternatives to having to win the big cities?  Perhaps it could be done by winning sizable majorities in all of those gray states on the map, and a few of the red states that might have larger populations.  That's a question for a study group/think tank; or a pollster/consultant like Kellyanne Conway or Scott Rasmussen.  While candidate D could virtually get an apartment in New York and campaign there for months with short one or two day trips to Chicago or El Lay, Candidate R would still require a mobile base of operations and a campaign aircraft to crisscross those gray states.

The disadvantage to us "dirt people" is that your concerns would never come up in a presidential campaign again.  It would strictly be a matter of how much you can transfer to the occupants of a few big cities.

The arguments that Feinstein makes against the electoral college are all based on the way it actually works.  Of course, she's incapable of seeing them as design features and not bugs.  She sees it as wrong that a tie in the electoral college goes to the house of Representatives and that would "unfairly grant California’s 36 million residents equal status with Wyoming’s 500,000 residents."   But the country is designed from the bottom up for balance of power.  If your idea is that having more citizens in your state means other states have no voice and get nothing, eliminating these balances seems like a good idea.

If you're a resident of one of those cities, I can see you being in favor of it.  It's a really bad idea for the country as a whole, though.  Thankfully, I don't see much chance of the change happening.