A lot of people have been finding and exposing those that are behind the Parkland students and the supposedly-grass roots protests this past weekend.  Sultan Knish, Daniel Greenfield, probably has the largest column on it.  Naturally, I've been watching as well.

The NSSF's Ammoland Shooting Sports News joined the fray with an article yesterday.  They point to this NBC Sports story revealing that Robert Kraft, owner of the New England Patriots, donated use of the team's private airplane to give the kids rides to the protests.  In explanation, they say that Kraft responded to a personal phone call from Gabby Giffords.

Further, Delta Air Lines donated three around trip charter flights to the protest, although we don't know if Gabby Giffords called Delta's CEO.  John Richardson at No Lawyers - Only Guns and Money blogged about this Saturday as well.


The March for Our Lives permit application was filed by Deena Katz, a co-executive director of the Women's March Los Angeles Foundation. This wasn’t just a little bit of professional activist assistance.

The application lists Katz as the “Person in Charge of Event”.

Katz apparently incorporated March for Our Lives as a 501(c)(4) organization instead of the more common 501(c)(3).  Why?  Secrecy.  Donations to c4 groups aren't tax-deductible, but in exchange the organization doesn't have to identify the donors. That makes c4 organizations a great dark money conduit.

There's a tangled web of dark money flowing here among these students useful idiots and a ton of backers.   Glenn Beck had his crew research as much as they could find in a few days, much more than a part time "citizen journalist" like me could find, and they found several ties to (three guesses...) George Soros.  It's an interesting 5 minute video.  (If you're not familiar with Beck, he regularly refers to Soros as "Spooky Dude", dating back to when Beck first got threatened by Soros' staff when he was on Fox)


On today’s show, Glenn chalked up a list of at least ten far-left donors known to be behind the March for Our Lives movement, including:
“Their list of donors reads like a who’s who of radical leftist organizations,” said Glenn. He later added, “The last thing that they want is for names like ‘Soros’ or ‘Farrakhan’ … to show up on their tax sheet. But we’ll never know the full extent because big progressive donors don’t want you to know who’s really in charge here.”

If you listen closely, you'll find Glenn found a different name than Sultan Knish found for filing the paperwork on the march.  Instead of Deena Katz, Beck's team found it to be Jeri Rhodes, former Greenpeace CFO.  Chalk it up to the difficulties of doing this detective work when all these organizations in the background are trying to stay hidden.

So why the secrecy?  Especially why if everything is so "grass roots"; it's all just honest, hardworking but traumatized teens looking for reform?   As if anyone capable of a moment of thought would believe that crap.  I think Sultan Knish has a good summary.


None of this has much to do with Parkland. The mass shooting by a mentally ill man who should have been committed and arrested long before he carried out his massacre was a political opportunity.

Now that opportunity is being exploited to the hilt by a professional class of political activists.

Gun control activists wring their hands over the NRA. They claim that a special interest lobby is illegitimately thwarting the “will of the people”. Yet it’s the anti-gun groups that are invariably false fronts. It’s very clear who runs the NRA. But the latest fake anti-NRA group is a nebulous shadow. Out front are the high school students and out back are the professional activists.

And who is really behind the whole thing? Hollywood celebs, Bloomberg, a network of organizations?

We know who supports the NRA. You can see NRA stickers on car windows even in the bluest cities in the country. But who really supports the anti-gun political network? You’ll need to spend hours sorting through paperwork, following the trail, comparing addresses and researching names, to even get a hint.

That’s what an illegitimate lobby thwarting the will of the people really looks like.

Instead of March for Our Lives, maybe it’s time to March for the Truth? 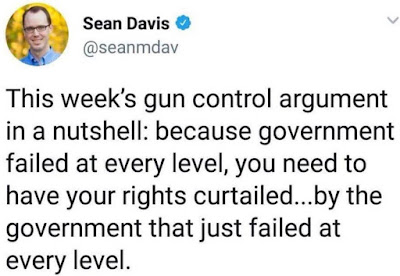 (From 90 Miles from Tyranny)

There's a deep reality here that I've said once or twice but hate saying.  The pro-freedom side needs a billionaire, and we need one for at least two reasons.

First, here we see Michael Bloomberg (worth $50 Billion) and George Soros (worth $8 B - both per the Forbes list) throwing around millions like it's spare pennies found in their sofa.  While I think the role of money in elections is overstated, there's no denying that billions of dollars can give the appearance of a lot of grass roots.  I recall Harry Reid being so upset about the billionaire Koch brothers' candidate donations that he dedicated time to attack them from the senate floor 134 times, but I find no evidence of anything like Soros' Tides Foundation, Open Societies or any of his other monetary shell games, and I can find no evidence of anything like Bloomberg's Everytown or the Demanding Mommies.

Second, and this just piles onto the previous advantage, the anti-freedom side has an inherent advantage in organization.  The anti-freedom side wants central control in everything and that means an almost military organization/hierarchy.  The reason they sprang into motion so fast after Parkland was that they were ready to spring.  They've been hiring community organizers, planning and putting every piece in place to act since Sandy Hook.  I don't know who and I don't know where, but the reaction was just too fast to have happened on the fly.  A decentralized bunch of gun rights advocates that are suspicious of central control going up against the organized anti-gun side is starting from way behind.

If it seems we're being outflanked on every side, it's because they hired troops to look for ways around us, putting pressure everywhere.  While we thought we had an upper hand because of the swelling gun sales year after year, they were working to squash any advantage we had.

Posted by SiGraybeard at 3:54 PM