Last Saturday, I mentioned that Mrs. Graybeard and I were in the process of experimenting with alternatives to Cable TV, or "cutting the cord" as it's widely known these days.  We had several catches, and in the comments to that post I noted that the approach I was taking ended up getting thrown out.  Instead of piggybacking on the existing cable from our CATV provider, we needed to run a new cable all the way from the antenna to the TV.

Our initial experiments were successful; in fact wildly successful compared to expectations.  TVFool said I should get on the order of 20 channels.  When an antenna is connected, you tell the TV to scan for every channel and it tells you how many it found.  It found 60.

The real surprise here is that the antenna says we should use a preamplifier with the antenna, and we don't need it.  I initially hooked it up incorrectly and we got nothing (my excuse: it was upside and backwards, so impossible to read the labeling).  While troubleshooting the problem we took the amplifier out and we went from two unusable channels to 60 excellent ones.  I'm going to try the amplifier again in a few minutes and see if we get more channels. 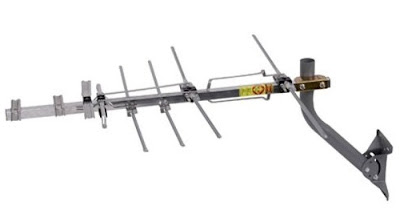 We get the major networks, ABC, CBS, NBC, Fox, PBS, a bunch of shopping channels, a bunch of old TV show/movie channels, and lots more.   Far more than we're likely to watch because the reason we started this effort was that we watch two hours a week of TV in a typical week, and we're paying far too much for two hours.  The local news is good for "boil water" or "road washed out" news, but I sure don't trust those national networks for news.

For the next few hours, maybe the weekend, we'll do some more research into streaming services for the few other things we actually would like to watch: Outdoor Channel, and handful of channels like SyFy, FX (movies), Fox News or OAN, and so on.  All of that is available, it's just a matter of finding the best "bang for the buck".  We'll get the DVR ready to return to the cable company and officially cut the cord.

One of the engineers' life mottos is, "The world is a collection of under-optimized toys".  This is one step in optimizing our video toys.