Killing Goats and Fighting Fishermen In the Galapagos Islands

It all started innocently enough.  In 1959, fishermen released three goats on the island of Pinta, one of the isolated, rocky islands in the Galapagos Archipelago about 800 miles off the coast of Ecuador.  The idea would be to hunt the goats if need be, presumably as a backup if they couldn't catch fish - no one would confuse goat for fish.  The goats did what goats do, so that by the 1970s those three goats had turned into 40,000 and the island's vegetation was being destroyed.

The story is from Modern Farmer, not one of my regular reads, so hat tip to the Ammo.com newsletter.

Goats have a well-known reputation for their voracious appetite, so much that they're bought for clearing brush and destroying invasive weeds.  That's OK if it's managed, but a herd of goats in a delicate place like the Galapagos turns into more change than ecologists can bear (really, preservationists, not ecologists, but that's another rant for another day).

By 1997, the Galapagos goat population had reached six figures. To fight back, an NGO called the Galapagos Conservancy convinced the Ecuadoran government to wage an extermination campaign against the goats.  A massive, multi-agency project called Project Isabela was launched.  Platoons of goat-hunters scoured three islands, on foot and in helicopters. The method of killing? A clean shot to the head or the heart.


“It can be hard to see so many goats lying dead out there,” says Dr. Linda Cayot, science advisor for the Galapagos Conservancy. “But those goats were destroying the habitat of the tortoises. In my heart and mind are the tortoises.”

“...so many goats lying dead out there”?  Yes.  The groups involved decided that the goats were the embodiment of all the nutrients the ecosystem produced.  If the goats were harvested and the meat shipped back to the mainland, those nutrients would be taken away from the Galapagos.  They decided the only right thing to do was to "recycle" those nutrients by leaving the goat carcasses to rot away.  (They say a handful of goats were consumed by the eradication team, but not many).

Since the whole problem started with three goats, there was only one possible outcome.  Only one way to be sure.  The eradication had to be total; every single goat had to be killed.


For Project Isabela to be a success, it required total eradication. “It took the same effort to get rid of the last 5 percent as it did for the first 95 percent,” says Cayot. To get rid of the stragglers, the team employed something called a “Judas goat.”

Judas goats were sterilized and injected with hormones to make them permanently in estrus (heat). These unwitting traitors were then set free around the islands, irresistible bait for the fugitives. By 2006, Project Isabela had eliminated all goats from the target areas.

There are still small problems here and there.  Some of the few locals like to hunt the goats and want some around.   More oddly the goats have become a political football.  When local fishermen are displeased with government fishing regulation, scientists say they retaliate by releasing new goats on the islands. “It’s reintroduction as a malicious act; a way to spite the park service.”

The conservationists are aware they might have a PR problem with their fans and monetary donors.  Goats are cute and furry and every honest preservationist will tell you it's easier to fund raise for cute, fuzzy little animals than ugly ones.  Ever seen a "Save the Blobfish" fundraiser?  If their average supporter knew they were funding a goat genocide, well that might not go over well.  Last words to Dr. Karl Campbell, the field manager who ran Project Isabela’s operations.


“We don’t want to put a cute face to an invasive species.We focus on the outcomes, letting people see how good the islands look once the goats are gone.” 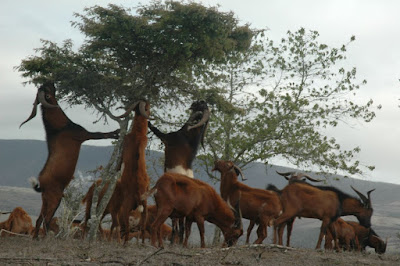