Story of the Week So Far

Circa News reports that over in Siberia, an airplane's cargo door became unlatched causing it to drop $368 Million worth gold, platinum and gems on the airfield.


An An-12 plane operated by the airline Nimbus took off for Krasnoyarsk carrying 9.3 tons of gold and other precious metals, according to a statement from the state Investigative Committee quoted by Tass. Damage to a door handle caused it to fly open and spill some of the metal.

Other photos and info at the Circa article seem to show that the entire 9.3 tons didn't fall out of the aircraft, so we have no way of knowing if everything that was dumped has been recovered.  It's odd that they specify they recovered 3.4 tons of gold and don't mention recovering anything else, though.  If you go to the original articles, there are pictures of bars of a white metal on the ground, and the article does mention platinum being among the "droppings", so gold clearly isn't all that fell out of the plane. 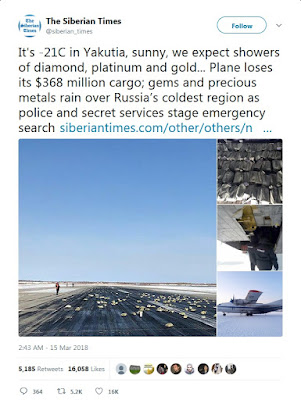 -21C is about -6 F, which I suspect is pretty balmy in Siberia, depending on lots of things.  It's probably not the worst weather the search and recovery teams have worked in.

An important story?  No.  But after a week like this, we could use some humor in our worlds; at least, I can!