A Different Sort of Project

Any cord cutters visitors here?  In the sense of ditching cable TV and moving to over the air and streaming services?  I'd be interested in your feedback if you see I'm getting ready to do something wrong.

I'm in the process of joining the "movement".  I've gotta say, though, that there's far much more to learn to do this than I would have thought before I started. Especially for a career radio frequency circuit designer, who got started in high-end satellite TV receivers for cable TV companies.   This was long before the birth of DirectTV and small aperture satellite receivers at home.  It was also well before the Digital TV "revolution".  TV is different and there's a ton of small details to learn and understand.

Let me back up for a second.  We've been cable TV subscribers since around the time we moved here into central Florida in '82.  There was broadcast (OTA) TV available, but a few networks and all of the transmitters were far enough away that we were considered fringe or beyond fringe for reception: not very good quality without a fairly serious outside antenna.  To get a good picture, and then for the larger variety of choices, we started cable.  Our provider was bought up a series of times and in the course of the last six months has gone up twice.  It has finally gotten to the point where we just think it's far too much for the little we watch.

So the process should be simple enough.  First and foremost, we need an outside antenna.  In the intervening 36 years we've been here, the transmitters haven't gotten closer, so we still need something better than a window antenna - not to mention we don't have a window pointing at the transmitters.  A popular website called TV Fool will help you find what signals you should be able to get and the distances to the transmitters.  Another site that does the same basic service is Antennaweb.  The HDTV industry has adopted color codes to help you choose the antennas you need and they classify them into ranges by mileage they should work over.  We chose an antenna.  We'll mount it on the west side of the house, about 15' up and manually point it at the transmitters to the northwest.

We want to keep the cable company as our ISP - we have nothing against their service, it's just the cost for the few things we watch that's bothering me. That means we have a cable coming to a junction box on the side of the house; we have underground utilities so it runs the roughly 40 feet from the corner of the lot to where it comes out of the ground.  That cable goes into the attic where it goes through a little signal splitter which sends one branch to the TV and the other (marked "Tap") here to the modem for the internet connection. 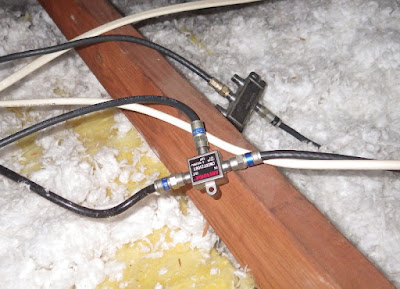 Closest to the camera is the power tap just described.  Behind that is another splitter, which apparently was a different cable installation (we've had a couple over the years).  I don't believe it's connected to anything else, but haven't tested it.

The point of mentioning this is that we have all the cabling we need already in place, so I don't see a need to go up into the crawlspace.  I just need to couple the antenna signals onto the coax to the attic, and that calls for a signal splitter/combiner.  This is a very common component in the radio/microwave world I come from; so common that there's a small industry providing components like that optimized for particular applications.  It turns out yet another part of the industry provides combiners and splitters for the TV industry and the TV world is different from the rest of the industry.

A different concern for TV splitter/combiners is that some of them need to pass DC voltage to power a low noise amplifier at the antenna.  This introduces complications.  Do you need the DC on both legs of the splitter/both inputs of the combiner or just one leg? Does the voltage go through either way you configure the splitter/combiner or just one way?  The first one I got, at Lowe's, had markings I misinterpreted, and only routed power from the dual connector side to the single connector side, while I need it to go the other way.  I picked another combiner.

Given all that, this is what my hookup diagram looks like: 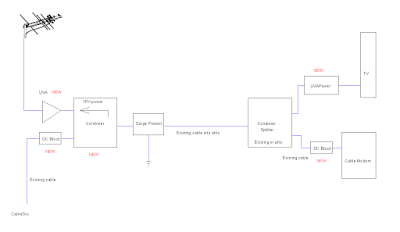 On the left, the new antenna (and low noise amplifier - LNA) feed the new power combiner.  I remove the cable on the lower left from the surge protector and put the combiner between them.  Antenna on one port, existing cable on the other.  Now the antenna is connected all the way to the TV but there's no power for the LNA.  That runs from a little box that blocks its DC from going into the TV and applies power to the coax that runs back to the LNA.

The DC Blocks are "just in case I need them", to keep the power going to the LNA from going back into the cable company's circuitry and to keep it from going into our cable modem.  I don't know that there's DC on those lines to block, but I think there will be.  Everything I've had to buy says "new"; the rest is existing infrastructure.  I consider myself both too old and too fat to crawl around in the crawlspace running new cables, and that's not even including the possibility of falling through the ceiling (happened to a friend once while not even fully in the attic; it was an awful spinal injury that was very hard to recover from).  With this approach, I won't need to go up there.

If you've done this sort of conversion, any input would be appreciated.