Florida Governor Rick "Voldemort" Scott signed the mess formerly known as SB7026 into law today.  The law, now officially known as the "Marjory Stoneman Douglas High School Public Safety Act" embeds the classic observation that laws passed as emotional reactions tend to be bad laws.  Like virtually all laws, it contains both good and bad features.  There are ways around the good features but there are no ways around the bad features.  The worst part is that any reduction of rights is never reversed.

The bill is being celebrated as "gun control" by Democrats and the mainstream media (pardon my repetition), and they should celebrate it.  With one mass shooting, a mere 17 kids, they got the Republicans to enact their policies for them. The Dems don’t have to worry about not getting votes next time, the Republicans do; in fact, judging by the anger at Republicans, I wouldn't be surprised if not one that voted it for it was re-elected.

As always, the Republicans are beaten badly because the Dems have a strategy and work it relentlessly.  While Republicans go along complacently, the Dems hire organizers who work for years in preparation for the times they can push their agenda, and in this case, they don't even need to push their agenda.  They didn't have to do a thing except propose amendments that make them look good to their base.

I’m not saying Bloomberg and his minions killed the kids themselves, or arranged the shooting, but the response to the shooting was clearly planned and executed like a military operation.  Far too many moving pieces dropped into place far too quickly for me to believe it’s just a reaction.  Florida is late to the show; new laws have already been passed in other states. Do you honestly think the kids had a list of companies to boycott? I doubt half of them even knew who the NRA is, let alone sporting goods companies that don’t have stores in South Florida. Wasn't the girl with the Sinead O'Connor hair talking about boycotting Cabela’s?  The nearest Cabela’s is close to Atlanta.  How many of the aggrieved students even know who they are?

"Wait a minute, SiG. What do you mean there are ways around the good features, but not the bad?"

Glad you asked.  The strongest feature is the Coach Aaron Feis Guardian Program, which allows people who work on school property to carry concealed.  As bonus, the volunteers get to take 132 hours of classroom and range training to get better at their new role as marshals.  How much would you expect to pay at Gunsite or Thunder Ranch for 16 days of training?  Comparing some courses at Gunsite (finding one that sounds close), it would be over $6000 not including air fare, lodging and all the rest.  If you accept the responsibility of carrying, the taxpayers foot the bill.  The bad part of this is that a late compromise took teachers out of eligibility for the program, so in effort to say, "we're not arming teachers", they took away the teachers' right to defend themselves.

The way around it, though, is that the local school district and sheriff's department can decide not to allow the program.  In a county as sapphire blue as Broward, what do you think the chances are the Sheriff Israel will allow it?  A sheriff known for chumming around with Hillary and Obama - before he was known for assigning responding officers to "wait outside while students died".  You know how it goes, there's two chances: slim and none, and slim already left town.

The bad features are all the gun control provisions and I don't see anyway around those.

The most useless is the 3 day waiting period, which is waived for holders of a state concealed carry permit (technically called the CWFL) for handguns and for those who completed a hunter safety course for the long guns.   I haven't found a single study that says those are useful at all, and especially not for school shooters, who plan these things for years.  A 3 day waiting period is "cooling off period" to prevent crimes of passion - as if they're even good for that.

Next most useless is raising the age to purchase long guns to 21, the same age as to buy a handgun.  Again, all they're doing is denying civil rights to people for something that has never been shown to matter.  Today's fun fact: do you know how many mass murders in the last five years have been committed by someone under 21 years of age?  Two: this cretin and the one in Sandy Hook.

The last gun control provision is not only useless but pointless: banning bump stocks.  All that a prohibition on bump stocks will do is reduce the sales of a couple of small companies, maybe push them out of business.  After the first reports that the Las Vegas shooter had bump stocks, I haven't heard of a single crime that involved them - and you know how first reports are always wrong.  You've also got to know someone's been looking for more crimes to blame on them.  The final law left the definition of a bump stock vague enough to ensure lots of prosecutorial discretion:

Real quick: does this outlaw trigger jobs?  What about drop-in triggers from your favorite race gun trigger company?  If the prosecutor is trying to run up a laundry list of charges against someone, I bet they go there.  What about shoe laces or rubber bands?

There are worse provisions, including creating Risk Protection Orders that allow confiscation of guns without due process.  I will need to look at the law in more detail.

Look, none of the gun control measures in this thing affect me.  I'm so far over 21 I barely remember even being 21, I have a CC permit so no waiting periods, and I couldn't care less about bump stocks.  What I have against those three things is they're meaningless if not counterproductive and they take away human rights.  Those gun control proposals will have no effect on the next psychotic killer - who probably already has his guns and is already known to various government agencies.  Bad laws reduce respect for all laws, and liberties lost in the heat of the moment, when "we've got to do something" never come back.  Florida has gone from being a friendly environment for gun owners to one less friendly.  You can blame it on whoever you want, but things are changing and not in a good way.  This has been going on for the last few years. 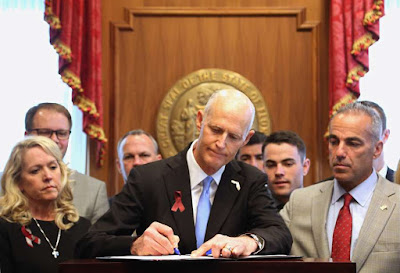