Almost Definitely Not Due to Trump, Nope Nope

I see this week that a company called Nucor has announced it's going to open a steel processing plant in Frostproof, Florida.  Frostproof is a small town in the middle of the state, south of Orlando and closer to "old Florida" places like Cypress Gardens and Lake Wales, which was famous for "The Singing Tower".


The Nucor “micro mill” will make steel rebar from scrap metal, according to the company, which expects construction to take two years after obtaining required regulatory approvals.

Making rebar from scrap metal is going to require melting the stock and turning it into new bar, which is going to need lots of power, which says a reliable link to a nearby electric plant.


Nucor officials were looking for a site of more than 300 acres with railroad access near a major electricity substation that could provide enough power to operate the facility, Malott said. The Frostproof site fit the bill.

This is not due to Trump's tariffs, as the county (Polk County) has been trying to lure Nucor to build in their city since last summer.


[Sean Malott, executive director of the Central Florida Development Council, which helped recruit the company] said he had worked to recruit Nucor since June but the breakthrough didn’t happen until last month, when the Polk County Commission approved property-tax and impact-fee breaks worth about $1.5 million.

The 25 percent tariff on imported steel announced last week by President Donald Trump might have helped seal the deal on the Frostproof plant, Malott said. Although he couldn’t say how much of a factor it played in Nucor’s decision, “I think it helped, and it’s one of the reasons the company is looking at expansion opportunities,” he said. “This would be a good thing for U.S. steel.” 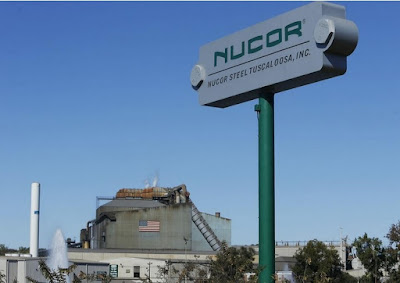 Florida isn't known for much in the way of industry, except for the tourist industry and theme parks.  In reality, we have quite a bit; I've worked in the electronics industry here in central Florida and in south Florida, and I know of electronics manufacturers scattered in other parts of the state, too.  Major defense contractors are spread around the state.  There's mining primarily for phosphate used in fertilizers,  but also other minerals.   I don't know of another steel manufacturing or recycling plant, though. There are steel fabrication companies but I don't see another doing this sort of work.