Get out of the public school system until it can be shown it behaves reasonably.  You'll be your own security, but you won't need security because no psycho like the school shooters will be there.

Ben Shapiro at the Daily Wire has the story of emails he's received from students being forced to walk out last week.


Advocates for this new march say that there is an agenda: gun control. But that’s not the real heart of the march. Students feel compelled to walk out by peer pressure, lest they be labeled uncaring about their fellow students. I’ve received dozens of letters from students expressing exactly this concern, and wondering why only one side of the political agenda is being handed credibility by the media.

You may have heard of Rocklin, California history teacher Julianne Benzel who was suspended with pay for asking students to think about whether it’s appropriate for a school to support a protest against gun violence if they’re not willing to support all protests.


“And so I just kind of used the example which I know it’s really controversial, but I know it was the best example I thought of at the time—a group of students nationwide, or even locally, decided ‘I want to walk out of school for 17 minutes’ and go in the quad area and protest abortion, would that be allowed by our administration?” she said.

In suspending her for two days, although with pay, I suppose the school is answering her question very clearly as well as answering the students writing Ben Shapiro about "why only one side of the political agenda is being handed credibility by the media"; only one side is considered valid by the schools.

Furthermore, Ben says he has received dozens of emails like this:
It's bad enough that children are indoctrinated more than educated; taught what to think instead of how to think.  It's bad enough that they increasingly shoved onto a path into (student) debt with little prospect for work (with few exceptions) because everyone has to go to college.  They're increasingly being used as pawns; useful idiots to causes and organizers they likely know nothing about. 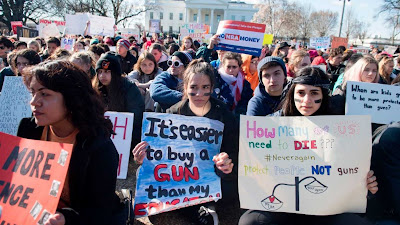 (Getty Images photo from the White House on Walk Out Day, from the Daily Wire)

Final words to Ben Shapiro about the letters quoted above:


These students will not be featured by the media. I’ve recommended that they walk out alongside their classmates, but carry signs reading, “Protect My Life — Arm Law-Abiding Citizens!” Presumably, they’d be ignored even if they did. But like the Women’s March, this walkout is a form of social pressure designed for a photo-op. And that’s too bad. If its advocates want gun control, they ought to call it a gun control march. To suggest that anyone who doesn’t support gun control doesn’t support children — even pro-Second Amendment children themselves, who choose not to support the agenda — is vile bullying.