The Silver vs. Dollar Meme

Have you seen this one going around?  I don't recall where I got it. 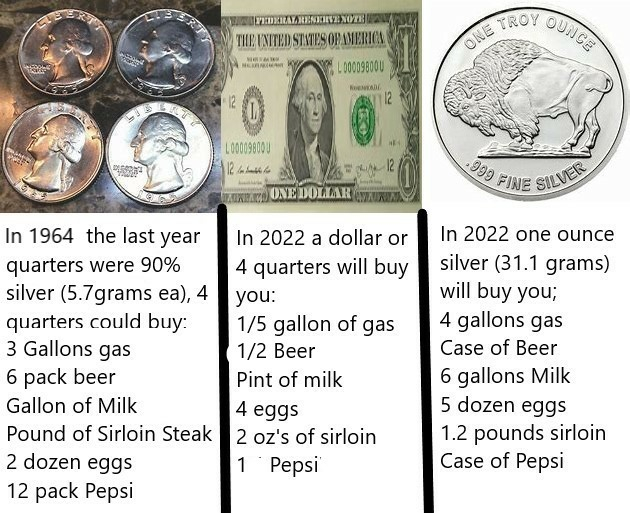 It's approximately right, but where it's wrong is embedded right there in the text; it's just hard to see directly. Note that in the left panel, it says a dollar was four 5.7 gram quarters or 22.8 grams of silver. In the last column it compares what 22.8 grams of silver bought in 1964 to what 31.1 grams buys today which seems to imply the dollar was that 31.1 grams of silver.  It's not that it's a nonsensical comparison, it's just that the right column is 36% more silver than the 22.8 grams of silver in the left column, so it's like comparing a 1964 dollar to $1.36.  Note that the increased amount of stuff that 36% more silver buys isn't necessarily 36% more of every item, but none of the handful of things they track actually cost more in silver today than in 1964, so their real prices have gone down.

Some years ago, I weighed four pre-1964 quarters on a reloading powder scale and determined they weighed 25 grams.  90% of that was 22.5 grams -  it could be the scale was wrong and it could be the coins were worn a bit from being in circulation.  After all 3/10 of a gram isn't much, unless you're buying gemstones where it's 1-1/2 carats.  (There's a side trip here into Troy ounces - as silver is weighed in - versus common or avoirdupois ounces and I'm going to studiously avoid this.)  This went into a spreadsheet where I can tell you what today's value for $1 face value of silver works out to be.  With a spot price at the moment of $20.68 per ounce, four of those 90% silver quarters are worth $14.96.  Which, of course, means a 90% silver dime is worth $1.50 ($1.496).

The point though is that the dollar has lost its value not that things are more expensive.  The dollar buys less because it's worth less - and well on the way to worthless.  If you bought things by weight in silver, most prices have gone down.

For the life of this blog, I've been saying that the creation of more money, "monetary stimulation" is going to lead to economic collapse.  I've talked about returning to a gold standard many times and I've stressed that it doesn't have to be gold, or silver or the giant stones the people on Yap Island used, but money can't be based on fiat - literally "it's worth something because I say so."  Where "I" is the Federal Reserve.  There are times I think the entire Federal Government is owned and controlled by the Federal Reserve Banks and not the other way around.

There's an old saying that value of paper money always - always - returns to its intrinsic value, the value of the paper it's printed on.  Pretty much zero.  Toilet paper?  The toilet paper is more valuable, but the fiat bucks will work.  The trap that the Fed finds itself in now is that since they've created trillions of dollars, every additional dollar they create is worth less than the one before it (called the marginal utility function).  That means they need to create even more trillions to really have an effect.  They can raise interest rates to try to crash the economy, but those are words nobody wants to hear.  Eventually - I can't tell you when - it has to collapse and the dollar return to the value of paper it's printed on.  Or the value of the memory cell in a DRAM module where it exists.  It's not actually zero, but it's in the same neighborhood.