DART Mission Follow Up - The Asteroid Has a Tail

While lots of folks have covered the impact of NASA's Dual Asteroid Redirection Test probe with Dimorphos - the "moon" of asteroid Didymos - something showed up in the last couple of days that I haven't seen a tenth of that press about.

The impact generated a comet-like tail of debris from Dimorphos that is huge.  The 525 foot wide Didymos has generated a tail that has been estimated to be 6,200 miles (10,000 kilometers) long by using the angular spread of the tail (from an instrument on the telescope) and the distance of the orbiting pair of asteroids from Earth.  This photo of the tail was taken two days after the impact and published at that link on October 3. 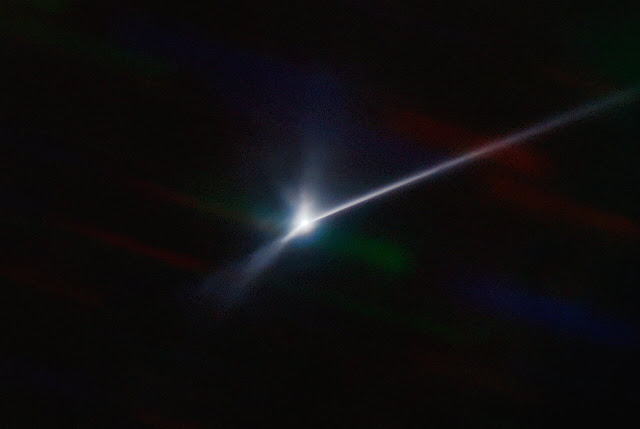 The photograph is the start of lots of followup measurements to come - both with the SOAR and other instruments elsewhere.

These observations will allow scientists to gain knowledge about the nature of the surface of Dimorphos, how much material was ejected by the collision, how fast it was ejected, and the distribution of particle sizes in the expanding dust cloud — for example, whether the impact caused the moonlet to throw off big chunks of material or mostly fine dust. Analyzing this information will help scientists protect Earth and its inhabitants by better understanding the amount and nature of the ejecta resulting from an impact, and how that might modify an asteroid’s orbit.

SOAR will continue to observe the aftermath of the DART impact, collecting data that will help researchers assess how successful this attempt to modify the orbit of an asteroid has been. SOAR is a key member of the Astronomical Event Observatory Network (AEON) of telescopes, which is dedicated to nimbly following up on reports of new astronomical phenomena.  Other instruments around the world will be observing as well.