NASA's DART mission - the Dual Asteroid Redirection Test - successfully concluded this evening at 7:14PM (Eastern time) by crashing the vehicle into the smaller of the two dual asteroids it has been targeting since last November.  The smaller is Dimorphos, which orbits the larger asteroid,  Didymos.  Being billed as the World's First Planetary Defense Test, the purpose of hitting the smaller body is to change its orbit and measure how much velocity change there is.

A screen capture from the replay with the last full frame of the surface of Dimorphos. 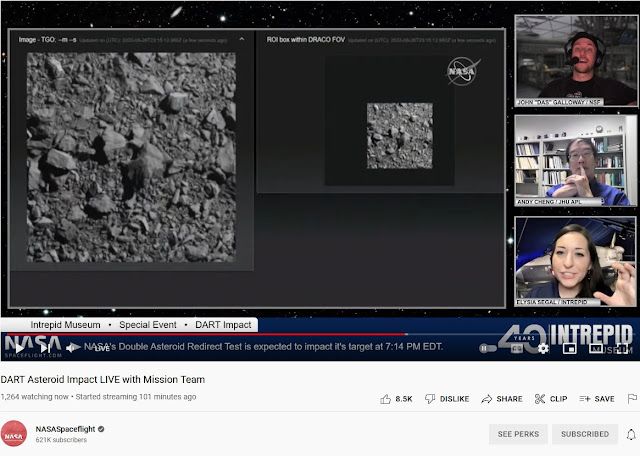 The DART mission began in the late evening California time of November 23, 2021, with its launch from Vandenberg Space Force Base's SLC-4E.  It's ride into space came atop a Falcon 9, marking the first interplanetary NASA mission launched on a flight-proven commercial rocket and the Falcon 9 family’s first interplanetary launch.

As it's full name implies, the goal of DART (NASA's mission page) has been to practice all of the steps necessary to rendezvous with a moving body in space, impact it and then verify that its trajectory change matches theory.  Why shouldn't the change match the prediction?  The problem isn't just hitting Dimorphos, but hitting it squarely, over its center of gravity and not imparting forces in directions other than what you've assumed.  Considering that no one has ever seen the two of them, it's hard to conclusively know what Dimorphos is shaped like and therefore where that center of gravity is to hit.  By the time that information can be obtained, it's too late to do the mission.

Basically, it's the movie Armageddon turning into reality, except for the mission being unmanned, so no Bruce Willis equivalent and no live video as it's going on.  Well, it's a test of the concept; Dimorphos and Didymos are no threat to Earth.

It always seemed to me that if one wanted to do a test like this, they'd better be pretty sure there's no way they can make a non-threatening asteroid into one that will threaten us.

Yes, I watched it live.  How often do you get to watch something that has never been done in all human history?