Artemis Back in VAB - and Ian Messes with Everything

The Artemis/SLS stack arrived safely at the Vehicle Assembly Building this morning after starting its return trip last night around 11PM EDT.  The four mile trip began at 11:21 PM and Artemis was declared secured at 9:15 AM.  The trip was entirely due to Hurricane Ian, but it nevertheless will be used to install a fresh set of batteries for the Flight Termination System, alleviating concerns about how long they've been installed for at least a few weeks. 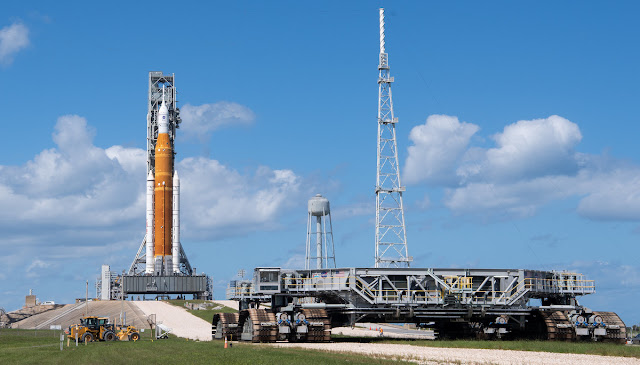 NASA’s crawler transporter moves into position near pad 39B on Saturday to prepare for the rollback of the Artemis 1 moon rocket to the Vehicle Assembly Building. Credit: NASA/Joel Kowsky

As can be seen from the launch window calendar, the current launch window ends next Tuesday, October 4th and the next window doesn't begin until the 17th.  All things considered, I don't think they could roll back to the pad and be ready by then.  Their preference for launch dates so far has been for the "dark green" dates on that calendar and the first one of those in the next window is the 27th, which is surrounded by red "don't launch" dates on both sides and then three dark green days before another couple of weeks delay until mid-November.  There is only one "preferred" (dark green) day in November: Sunday the 27th.

If it's not obvious, Ian is messing with everything.  There's a launch currently set for September 30th; an Atlas 5 Mission, satellites called SES 20 and SES 21 for the company SES of Luxembourg, and October 3rd is still scheduled for the Crew-5 mission to the ISS.  I have to consider those as being at risk as this storm plays out.

Where I live, we're currently under tropical storm warnings.  The highest wind forecast I can document from the National Weather Service is for sustained winds of 31 mph and gusts to 50 as of Tuesday evening, between the 8 and 11 PM updates.  Those winds will be overnight Wednesday and into Thursday.  As has happened frequently in the years I've been watching these things, the point of landfall has moved back closer to the one predicted last Friday than any of the predicted points since then - around an area called Port Charlotte, south of Tampa Bay.  The storm hasn't hit the wind speeds that made the headlines; saying 140 mph or more.  Given it has less than 18 hours before landfall and interaction with land will cut that time down, it would take an explosive drop in central pressure to get to 140.  I don't know enough to know if the environment can support that.  With the wind speeds I can see forecasts for, I haven't done our full up hurricane preps that I would do if it was coming from the east.