If you've heard this, you probably heard it as an absolute, but it technically isn't absolutely sure.  According the Artemis I blog, they won't decide for sure until tomorrow.

NASA is foregoing a launch opportunity Tuesday, Sept. 27, and preparing for rollback, while continuing to watch the weather forecast associated with Tropical Storm Ian. During a meeting Saturday morning, teams decided to stand down on preparing for the Tuesday launch date to allow them to configure systems for rolling back the Space Launch System rocket and Orion spacecraft to the Vehicle Assembly Building. Engineers deferred a final decision about the roll to Sunday, Sept. 25, to allow for additional data gathering and analysis. If Artemis I managers elect to roll back, it would begin late Sunday night or early Monday morning.

The current five day track from the National Hurricane Center, NHC (as of 2PM EDT or 1800 UTC), shows the landfall has moved north, past Tampa Bay and up to (what appears to be) the Crystal River or Homosassa area, - 50 to 60 miles north of the area that was forecast last night through 8AM this morning and easily over 100 miles since the forecast plot I put up yesterday.

The thing is, the afternoon model plots still have the NHC models the farthest east of all of them, and NHC typically isn't an outlier.  I've attempted to point out some of the points on the NHC track in the red color they use, to show how over almost all of the 5-day predictions, they're well east of all but one model family.

On to the lighter side topic; what's a Fling-a-Ding?  An attempt to make a novel concept for rocket launchers seem a little less deadly serious.

Space News reported this week that the very novel launch company, Spin Launch, has raised another $71 million for their attempts to build a centrifuge-based launcher that will fling an orbital rocket's upper stage high enough to replace a conventional booster or an airplane-drop for the upper stage. This raises their total funds raised to $150 million.

In case you missed it, the company has already built a suborbital-class spin launcher, AKA rocket flinger, rocket yeeter, or others and tested it successfully.

SpinLaunch built a smaller version of its centrifuge at Spaceport America in New Mexico, 33 meters in diameter, for suborbital tests. The system launched its first vehicle in October 2021 and has conducted nine tests to date, although it has disclosed few details about the speed and peak altitude of those tests.

“SpinLaunch’s mission is to bring the world low-cost, sustainable access to space. We’ve taken a big step in that direction with the completion of our 33-meter Suborbital Mass Accelerator,” said Jonathan Yaney, chief executive of SpinLaunch, “retiring the technical risk as we prepare the way for the construction of our full-size Orbital Launch system.” 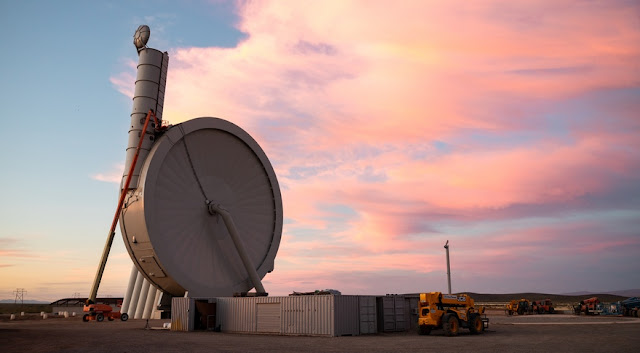 The company has said that the orbital class Flinger will be 100 meters across or about 330'.  They expect to make orbital launches with the bigger accelerator as early as 2026, but have a few additional hurdles to overcome.  First off, it can't be at Spaceport America (where this one is) due to overflight issues and they don't have a location for it at this time. Second off is the whole nobody has done this yet, and I gather the requirements for mechanical design of the satellites might be bit unprecedented.

[Vice President Randy] Villahermosa mentioned in his talk the company was planning “an intermediate service around 2024 that will use some of our satellite and launch tech.” He didn’t elaborate on the service but said that the company will release additional details in the coming months.

SpinLaunch, in addition to the launch system, is working on satellites optimized for it. They include a 12U cubesat bus and a 200-kilogram satellite, the latter equal to the payload capacity of the orbital system. A 12U cubesat prototype will launch as soon as January, he said, but disclose the launch provider.

I have lots of questions about this sort of launch mechanism.  I don't believe the concept is all new and has been talked about before, but the speeds of a booster are nothing to take lightly although as part of a launch system they don't need to achieve many times the speed of sound.  When Virgin Orbit drops a craft from their 747 Cosmic Girl, they're not even going Mach 1.  A point in their favor is that their flight path is almost entirely parallel to the ground, while a conventional rocket takes off vertically and then starts to pitch over very early in the flight, to gain that horizontal speed component.  A substantial amount of fuel is used to get moving vertically while gaining speed going horizontally.

A very long winded way of saying that the angle of the launcher silo (right word) on that centrifuge looks too vertical to me.  Which pales in comparison to what I see as the real problem: how do they change the path of the rocket upper stage going at hypersonic speeds in the centrifuge to going straight out that launch tube?  That seems to be a really critical timing.  And what about the shock of the acceleration from changing directions.  They can accelerate in a vacuum by closing off the silo, but sooner or later they've got to open it and the pressure of that air coming in is going to hammer that upper stage like a some sort of monster.  I'll bet it's an incredible amount of G-shock.

Posted by SiGraybeard at 4:56 PM