I tell ya, take a couple of days away from watching SpaceX news to clean up some stupid tree branches and suddenly they break a couple of big stories.

NASA and SpaceX have signed an Agreement to study the feasibility of a SpaceX and Polaris Program idea to boost the agency’s Hubble Space Telescope into a higher orbit with the Dragon spacecraft, at no cost to the government. 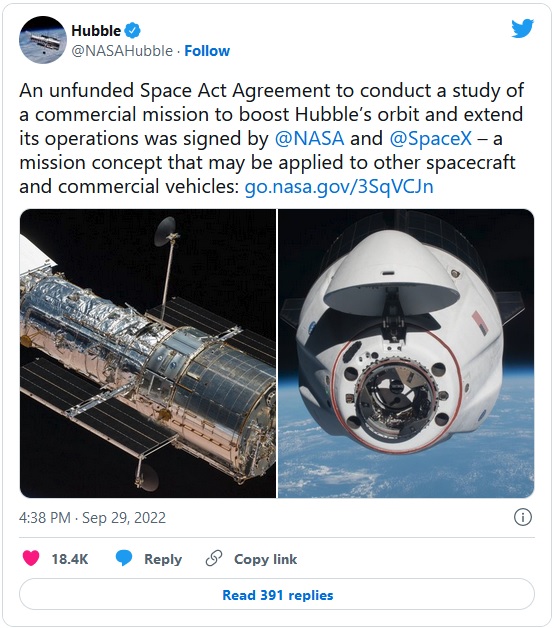 Did you catch that reference to SpaceX and the Polaris Program?  As in the Polaris Dawn mission by Jared Isaacman's company, which is preparing for the first privately conducted spacewalk mission?  Yup.  Isaacman was directly involved in the September 29th press conference.

NASA and SpaceX will spend the next six or so months discussing whether it’s possible to use Dragon to boost the telescope’s orbit back to a nominal 600 kilometers (~372 mi). Both parties say that the agreement will also investigate the possibility of Dragon servicing missions, which could be even more significant for Hubble. While a boost that large would likely keep it in orbit for decades to come, there’s no guarantee the telescope would remain functional to take full advantage of the extra time it would have.

During the fifth and final Space Shuttle servicing mission, NASA astronauts installed a docking adapter (Soft Capture Mechanism) on the Hubble Telescope. Although no concrete plans existed for any additional servicing missions, the forward-facing installation of that adapter has made this feasibility study possible.

The docking adapter on Hubble presents a natural handle for the Cargo Dragons to use to manipulate the giant satellite.  The Shuttles could grab the HST with its remote manipulator arm, but the Dragons don't have anything quite like that.

The lurking, unnamed obvious alternative in this story is Starship.  Only Starship is big enough to potentially put the HST in a cargo hold and bring it back to Earth, or lift it to a higher orbit.  Polaris has three more SpaceX missions planned.  The first is the Polaris Dawn, EVA mission already mentioned.  The second mission hasn't been described yet. The third mission, however, aims to be the first crewed launch of Starship.  Interesting coincidence, isn't it? 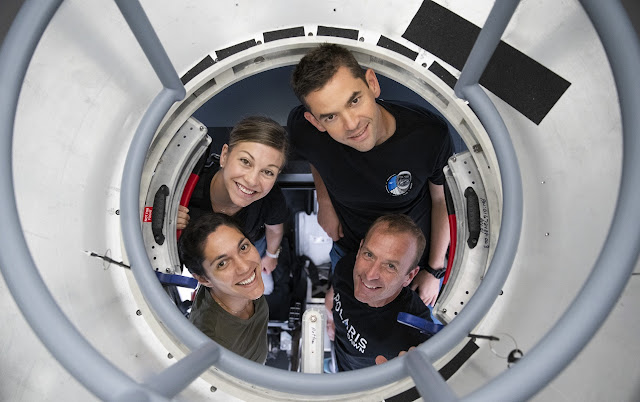 Polaris Dawn crew during an EVA training mission.  From top right, clockwise, Jared “Rook” Isaacman, Scott “Kidd” Poteet, Sarah Gillis, Anna Menon. Note that Isaccman and Poteet are both executives at Shift4 as well as extremely qualified pilots; Gillis and Menon are both engineers with SpaceX on the manned spaceflight side, so probably not cool enough to have nicknames like Rook or Kidd.  (Inside joke for other engineer geeks).

SpaceX and NASA have confirmed that they are moving forward with plans to modify the company’s second Florida launch pad, SLC-40, to support Crew and Cargo Dragon missions.

This story has been in the background since June, after some concerns arose that if the (still experimental) Starship vehicle should have a serious mishap on the new launch pad being built within yards of pad 39A, it could conceivably eliminate the ability of SpaceX to launch crew rotation missions to the ISS, like Tuesday's coming Crew-5 mission.  The Starship pad is 1000 feet from pad 39A, and we all have to admit SpaceX does have a history of building prototypes that occasionally explode.

Naturally, these are high stakes, and while nobody doubts that SpaceX could repair and rebuild pad 39A, NASA doesn't want to risk not being able to launch astronauts from the US again, potentially for months.

Then there's Boeing's Starliner.  Starliner would launch from farther away (on an Atlas V for now), but isn't certified for service.  Their next test flight, the first crewed test flight (CTF), is currently penciled in as no sooner than February 2023. Assuming that goes perfectly, the first operational flight of a Starliner wouldn't be likely until very late '23 to early '24.  Assuming it would go perfectly seems to be a bit of reach; both of Starliner’s uncrewed test flights have uncovered significant issues that required months of additional work to rectify, although the second was clearly better than the first.

It doesn’t matter if Starship probably won’t explode or if Starliner will probably be ready to take over. The risk is always there.  With no backup to for both Cargo and Crew Dragon, it's no wonder NASA wants an alternate launch site.

Nothing is known about the nature of the modifications that LC-40 will require. But more likely than not, NASA will require SpaceX to develop something similar to Pad 39A’s facilities. That would involve building a new crew access tower, crew access arm, escape system (39A uses baskets and ziplines), and an on-site bunker for astronauts.

Since the DOD and the Three Letter Agencies are looking more to SpaceX these days, there might be more in the way of the ability to hide payloads.