As expected, NASA and SpaceX have decided to delay the next manned flight to the International Space Station, Crew-5, at least a day until Tuesday October 4th No Earlier Than 12:23pm EDT, with backup date of Wednesday the 5th. 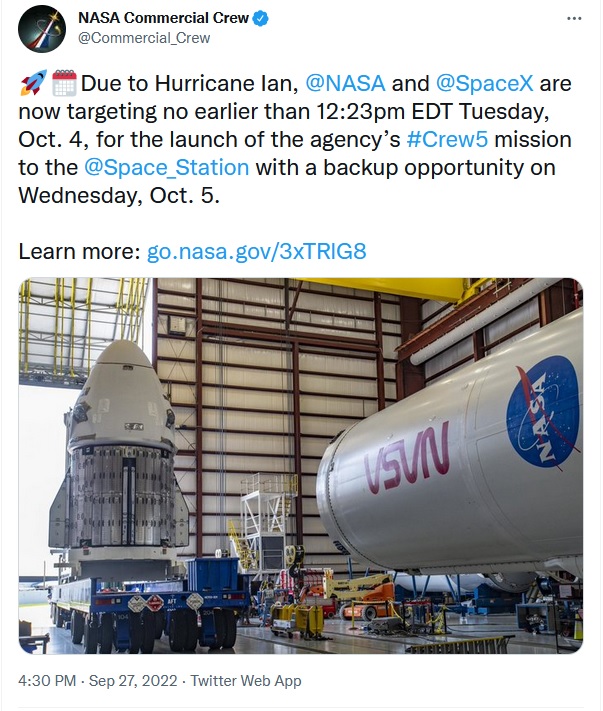 The latest forecasts are showing Ian crossing over the north end of the Cape (or around there) as a tropical storm around 3PM tomorrow, and then curving harder to the north, making a second landfall in South Carolina late in the day on Friday.  While the KSC is under Hurricane Warnings, as we are farther south, the chances of hurricane force winds appear to be in the 50/50 range, perhaps a little lower.  The usual source I check for the compass heading of the flights doesn't have an update for Crew-5 so I can't tell if the recovery barge for the booster is in the North/South Carolina waters or not.

The mission will ferry NASA astronauts Nicole Mann and Josh Cassada, Japanese (JAXA) astronaut Koichi Wakata, and Russian astronaut Anna Kikina to the International Space Station, where they will spend about five months maintaining the orbital outpost and conducting science. Upon arriving at the ISS, they will take over from astronauts Kjell Lindgren, Bob Hines, Samantha Cristoforetti, and Jessica Watkins, who will board their own Crew Dragon and depart the station five days later.

Attached to a new, expendable ‘trunk,’ the Crew Dragon spacecraft arrived at SpaceX’s Pad 39A processing hangar on September 23rd and was fully integrated with Falcon 9 (an expendable second stage and reusable booster) by September 26th. Falcon 9 booster B1077 will debut on the mission alongside Dragon capsule C210 (Endurance). Dragon C210 splashed down with four astronauts after its first mission, Crew-3, on May 6th, 2022, and will head to orbit a second time 155 days later. Dragon’s turnaround record is 137 days.

Our storm warnings here in southern Brevard county were upped from Tropical Storm warnings to Hurricane Warnings this morning at 11.  That prompted me to take it more seriously than a Tropical Storm, which I've long called a poopy day with a press agent.  We put up the shutters on the sides of the house most likely to get direct winds but didn't do the "full Monty" prep.  My antennas are still up.  Our local NWS office detailed forecast calls for winds peaking at around 40mph with gusts to around 60.