Not Looking Good for the Artemis Launch Tuesday 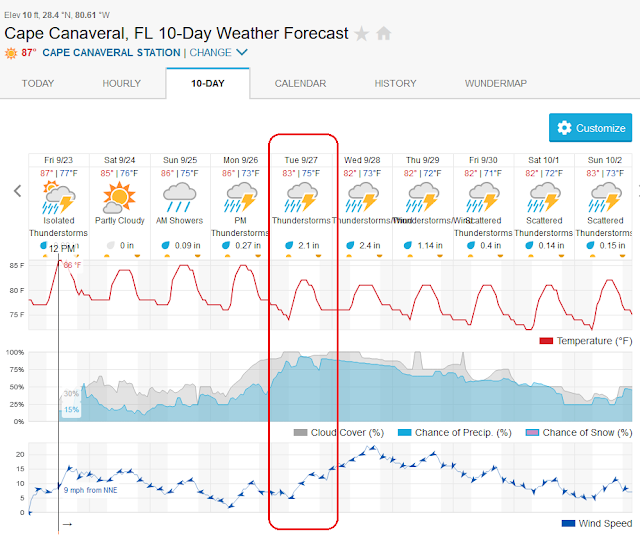 That's Tuesday's penciled-in launch (scroll down that page) highlighted in red - chances of rain over 90% almost all afternoon.

Around the time I made up that graphic, the National Hurricane Center posted this one. 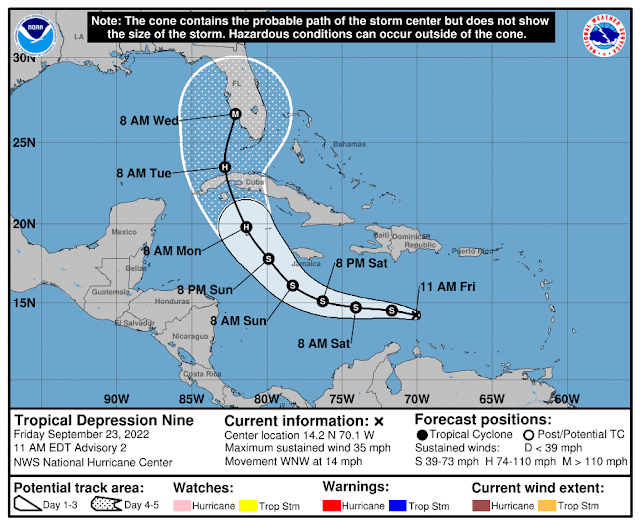 It just became a tropical depression, yet they have it forecast as a Category 3 or higher "Major hurricane" at landfall on the gulf coast by Wednesday morning.  In the forecast image above, you can see the winds peaking Wednesday afternoon, but well short of tropical storm, let alone hurricane strength.  Borrowing the graphic of Artemis launch windows from a month or so ago:

It seems if we assume Tuesday is out that (unless they have to roll back to the VAB) Friday through Tuesday 10/4 could be available.  (Refresher: Red = no go; dark green = longer missions; light green = shorter missions)  There were rules for the amount of delay required during the last attempts to launch, which (IIRC) were the second attempt could occur 24 hours after a scrub but the third attempt had to be 48 hours after the second scrub.  Something like that.

For the majority of you who don't spend a few weeks every year following these forecasts, let me add that the first three days are shown in white because of the expectation that this is the limit of a forecast that can be depended on.  The stippled area is even more of a WAG (Wild-Assed Guess) - expect it to move like a flag in the wind.  Even in the white forecast cone, the exact path is expected to wander and the storm is just expected to be somewhere in the white area; there are maps on the NHC website that don't include the center of the forecast path.  The white cone here is significantly wider than the one for Fiona, even days ago, meaning there's more uncertainty in this prediction than there was for Fiona.  In general weaker storms (invest areas, depressions, tropical storms) are harder to predict than when they become stronger.

I'd be less than surprised to see that landfall prediction move around quite a bit over the next few days.

Posted by SiGraybeard at 2:20 PM