Today's test of the repairs to the SLS unfolded slowly - over nine hours from the start, but the conclusion was that they passed and all objectives were met.  To lift the entire announcement from the Artemis blog (at that link):

The launch director has confirmed all objectives have been met for the cryogenic demonstration test, and teams are now proceeding with critical safing activities and preparations for draining the rocket’s tanks. After encountering a hydrogen leak early in the loading process, engineers were able to troubleshoot the issue and proceed with the planned activities.

The four main objectives for the demonstration included assessing the repair to address the hydrogen leak identified on the previous launch attempt, loading propellants into the rocket’s tanks using new procedures, conducting the kick-start bleed, and performing a pre-pressurization test. The new cryogenic loading procedures and ground automation were designed to transition temperature and pressures slowly during tanking to reduce the likelihood of leaks that could be caused by rapid changes in temperature or pressure. After encountering the leak early in the operation, teams further reduced loading pressures to troubleshoot the issue and proceed with the demonstration test. The pre-pressurization test enabled engineers to calibrate the settings used for conditioning the engines during the terminal count and validate timelines before launch day to reduce schedule risk during the countdown on launch day.

Teams will evaluate the data from the test, along with weather and other factors, before confirming readiness to proceed into the next launch opportunity. The rocket remains in a safe configuration as teams assess next steps.

When I first started paying attention this morning, they had encountered the leak mentioned in the first paragraph above.  The NASA team halted filling and said they would let the pipes warm up, then reseat the Quick Disconnect connectors in hopes they'd seal better.  That worked because the leak was small enough to live with as they slowly filled the hydrogen tank.  Much later in the day, an engineering report said that the leak resolved itself and became negligible as the tank was being filled - exactly as designed and expected.

This is the first time since the green run test up at Stennis Space Center in Mississippi back in March of '21 that the SLS has gotten fully fueled and to this point.  It certainly raises my optimism about this hardware's chances of flying.  They officially haven't declared victory and said they intend to launch on the 27th, next Tuesday, but at this point it seems to depend on the test range extending the rated life on the Flight Termination System batteries. 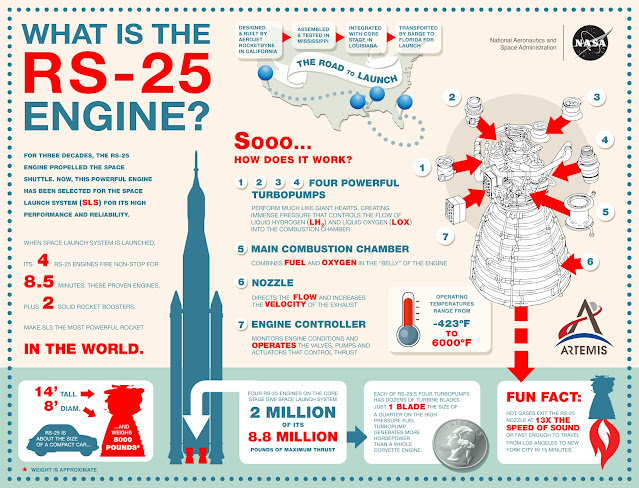 As always, credit where credit is due - to the engineers and techs that got it to work.  Best of luck for the real test.