You would think with our problems assuring we have sufficient energy to run our society, there would be a push to exploit our enormous natural gas reservoirs.  I'm sure you've heard that in the last decade, discoveries of new ways of extracting natural gas from rocks has increased our projected gas reserves spectacularly.   I've read we have enough gas to run the country for a hundred years. 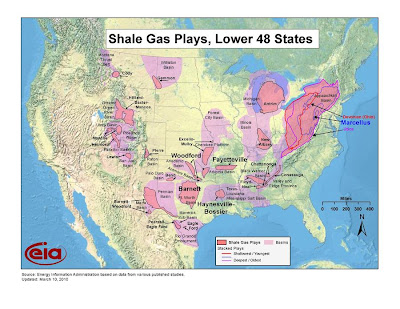 (image source)
I have a good friend who left the electronics industry rat race a couple of years ago; moved north and settled on a farm in some of the new natural gas country (and I've got to say that's a very tempting idea).  She sends me this interesting news item:


On May 20, the Department of Energy gave approval for Cheniere Energy Inc. to export 2.2 billion cubic feet of natural gas per day from its Sabine Pass, La., port terminal - the first approval of overseas export of U.S.-produced gas from the lower 48 states.

I can see why Cheniere might want to do that.  If they can get a better price from countries that don't have gas, I can see why they'd want to export their product.  But Texas billionaire T. Boone Pickens, said,


"So here we are, we’re exporting our clean-burning fuel (nat gas) and importing dirty oil… We’re gonna go down as the dumbest crowd in history…"

I've got to say I've thought that....  Then I realized T Boone is optimistic.  We're going to go down in history as the nation that committed suicide by being so afraid to use any form of energy that we just laid down and died.  Sort of like the people of Miranda.


"These are just a few of the images we've recorded. And you can see, it wasn't what we thought. There's been no war here and no terraforming event. The environment is stable. It's the Pax. The G-23 Paxilon Hydrochlorate that we added to the air processors. It was supposed to calm the population, weed out aggression. Well, it works. The people here stopped fighting. And then they stopped everything else. They stopped going to work, they stopped breeding, talking, eating. There's 30 million people here, and they all just let themselves die."

In our case it's the environmental nuts, fruits and flakes, not the Pax.
Posted by SiGraybeard at 10:07 PM