Is It Malice or Stupidity? Part 2

Last night, a friend sent me an email pointing out how the city council of Cedar Falls, Iowa was set to vote on a policy that citizens are required to provide a key that firefighters can use to access their property.   The bill passed on the vote last night, effectively (in my mind) eliminating private property in the city.  I see way too many problems with this idea to ever support it. So what is it?

To begin with, at this time it does not apply to single family homes, but to apartment buildings with "three or more" units.  A previous law just like this applied to commercial property.  If you own a duplex and rent out half of it, you are exempt; a triplex (obviously) falls under this one.  The articles say they are doing this to comply with the 2009 version of the "International Fire Code".  Wikipedia doesn't have an entry for "International Fire Code", but it wasn't too hard to find it.  (h/t to remixx world). 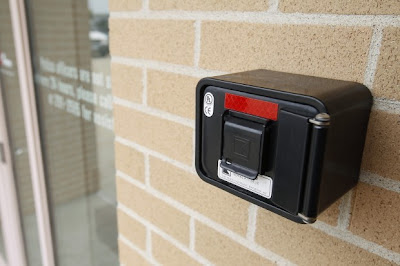 The lock boxes that are required in Cedar Falls, from the WCF Courier.  A few seconds of search engine-fu shows it looks very much like a "Knox Box model 1659"

Do you have a problem with this?  I sure do.  To begin with, this is like giving the keys to your house to a total stranger to hang in the open in an unlocked office - with your address on it.  Anyone who wants it is going to get it.

I guarantee you someone who is not authorized can open that box.  The first thought is to take a sledgehammer, break it off the wall, and open it.  If breaking it off didn't open it, I'd take it home and use a bandsaw.  Criminals might be lazier.  Think you can pick that lock?  I'm sure someone could.  Brute force methods like that aren't very sophisticated.  A social engineering approach should work.  I'm sure you've seen that the operators in 911 call centers and other police dispatchers have been romanced by low lifes, so they can get inside info on where the cops are.  I can imagine someone getting to know a gullible person just to get that key.  It really is "the key to the city".

I find it hard to believe that "the only ones" will be the only ones to get that key.  In fact, a famous case in Seattle rolled up hundreds of thousands of dollars in thefts from use of the Knox Boxes.

So is it malice or stupidity?  In this case, I'm going to go with stupidity on the part of the council.  This is apparently a widespread initiative.  In searching for references I used here, I found links to fire departments doing the same thing all around the nation.  I would hope this would be voluntary - if you want it for those "I've fallen and I can't get up" situations - fine.  If you want to pay for it, fine.  But to make it a legal requirement is going too far.


Of all tyrannies, a tyranny exercised for the good of its victims may be the most oppressive. It may be better to live under robber barons than under omnipotent moral busybodies. The robber baron's cruelty may sometimes sleep, his cupidity may at some point be satiated; but those who torment us for our own good will torment us without end, for they do so with the approval of their own conscience. — C.S. Lewis

It sure will make those "Sneak and Peek" searches easier for the fed.gov, though, won't it?
Posted by SiGraybeard at 9:09 PM