Is It Malice or Stupidity?

I'm sure you all know the old saying, "never attribute to malice that which can be adequately explained by stupidity".  In a way this goes with the saying, "once is an accident, twice is coincidence, three times is enemy action".

While the whole Fed.Gov seems to compete intensely for the title, few would argue FEMA could claim to be the most incompetent agency in the country.  They were the target of the media's attempts to destroy George W. Bush after Katrina, right?  They're not better now, the "thrill up the leg" media just doesn't report on it since The One is in office.

Courtesy of "The Blaze", we find this story of FEMA malice or stupidity:


Jefferson County resident Jonathan Stewart said he laughed in shock after the Federal Emergency Management Agency (FEMA) claimed the house his family lost in the deadly April 27 twister was ‘not unsafe to live in’.

Mr. Stewart, family and his "house": 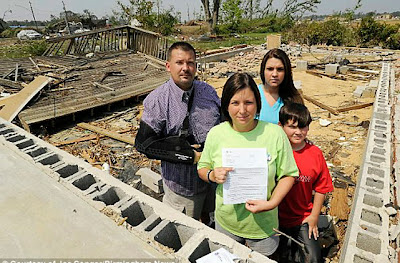 "Not unsafe to live in"?  I suppose the roof isn't going to fall in on them - it's probably in the next county.  No windows to fall on them either.  Nothing except maybe bird droppings.

Malice or stupidity?  If it's true that "once is an accident, twice is coincidence, three times is enemy action", there's more than three of these reported in that Blaze article.  Kinda reminds me of the story about Texas being denied aid for their fires.  Which means both of these are probably purely political decisions.
Posted by SiGraybeard at 8:34 PM