Odds and Ends Round Up - An Occasional Series

Time for LightSquared to put up or shut up.  As I said on Saturday, broadband company LightSquared tested their plan to put up broadband services next to the GPS band and was to send a report to the FCC this week.

UrgentComm reports there's a massive gap between LightSquared and the GPS industry.


Speaking at an event sponsored by the National Space-Based PNT Advisory Board, Trimble Vice President and General Counsel Jim Kirkland recently called on the FCC to focus its efforts on moving LightSquared to new spectrum. “It's time for the FCC to stop squandering resources trying to find a solution to an unfixable problem.  Instead, it should focus its efforts on finding spectrum that LightSquared can operate in — where LightSquared won't interfere with GPS,” Kirkland said.

One of the things I like about radio design is that my circuits don't care how I feel about them.  They don't care if I think they're the most clever thing in the world.  They'll work the way physics demands they work - or not.  Call it trial by fire.  That applies to LightSquared here.  If you guys know a way around, put it up.  If not, go back home.  Personally, I don't believe there is a fix.  If there was something they could do on their end, why wait?  Why not just show you can fix it from the start?

Of course, if we see the FCC give them authorization we'll know that they don't give a crap about protecting existing services.  If the FCC allows it, an astute investigator should look for signs of unaccountable, unearned income in the FCC staff.  Perhaps an extra car, extra vacation home.  That sort of thing.


On a very different topic, I'm sure most have noticed the Dow is looking pretty crappy.  I got this graph in my daily mail from Stocktiming.com 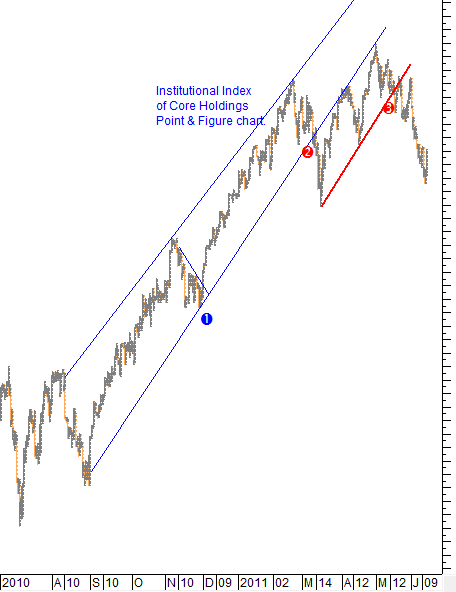 The chart shows (as it says) the core holdings of the big institutional investors.  You'll see the obvious increasing channel since August of 2010.  Around March, the index fell out of the channel, below the support line, but continued to climb only now with the resistance line (doesn't want to go above) being the former support line (doesn't want to go below).  This is referred to as "climbing a wall of worry".  And then in mid-May, it broke that second support and has been falling ever since.  Not exactly free fall, but not good either.  On this indicator, I don't see any natural place for this to stop.

I think it's going to be a rocky summer.

Oh, and I should let my loyal readers know that I am not a lesbian.
Posted by SiGraybeard at 8:27 PM