Is Someone Trying To Create a New Holodomor?

Is a reference to the Holodomor going too far?  Read for a while and then tell me.

Ann Barnhardt posts the contents of a phone call she received.


1. File this one under "Now It All Makes Sense". A Missouri farming and ranching contact just got off a conference call wherein he was informed that the federal government is sending out letters to all of the flooded out farmers in the Missouri River flood plain and bottoms notifying them that the Army Corps of Engineers will offer to BUY THEIR LAND.

Of course they're going to buy the farm land.  It's your benevolent government just helping you as much as they can.  You're having troubles due to these unfortunate, unpredictable floods, so they're going to help you out by using your neighbor's money to buy your farm.


Intentionally flood massive acreage of highly productive farmground. Destroy people's communities and homes. Catch them while they are desperate and afraid and then swoop in and buy the ground cheap. Those evil sons of bitches.

Intentionally flood the lands?  You mean the floods weren't "unfortunate, unpredictable" "acts of God" events?  Joe Herring at the American Thinker backs that up in this article.  You should RTWT.  The essential argument is this:

Sixty years ago, the Army Corps of Engineers had a mandate to tame the Missouri River, "...by constructing a series of six dams. The idea was simple: massive dams at the top moderating flow to the smaller dams below, generating electricity while providing desperately needed control of the river's devastating floods." Sixty years ago was the 1950s; America was flush with our success in WWII, and taming the environment was a priority everywhere. But thirty years later, the 1980s, the greenies got involved.


An idea to restore the nation's rivers to a natural (pre-dam) state swept through the environmental movement and their allies.  Adherents enlisted the aid of the U.S. Fish and Wildlife Service (FWS), asking for an updated "Biological Opinion" from the FWS that would make ecosystem restoration an "authorized purpose" of the dam system.  The Clinton administration threw its support behind the change, officially shifting the priorities of the Missouri River dam system from flood control, facilitation of commercial traffic, and recreation to habitat restoration, wetlands preservation, and culturally sensitive and sustainable biodiversity.

You can guess what happened next: the system turned entirely toward restoring the river to its wild ways; restore the animals at the expense of the humans.


The Missouri River Recovery and Implementation Committee has seventy members.  Only four represent interests other than environmentalism.  The recommendations of the committee, as one might expect, have been somewhat less than evenhanded.

This was an exceptionally snowy and wet winter.  The Missouri is running at levels it has not run in the 60 years the Corps of Engineers has been managing the river:


The U.S. Army Corps of Engineers is a victim/tool of the above-described process.  The horrifying consequence is water rushing from the dams on the Missouri twice as fast as the highest previous releases on record.  Floodgates that have not been opened in more than fifty years are in full operation, discharging water at a rate of 150,000 cubic feet per second toward millions of Americans downstream.

Note that this surge of 150,000 has to eventually go from Montana and North Dakota down through the Mississippi River and into the Gulf.  Their flooding isn't over, yet.


This is a mind-boggling rate of release.  Consider that 150,000 cubic feet of water would fill a football field instantly to a depth of four feet.  This amount of water, being released every second, will continue unabated for the next several months.  The levees that protect the cities and towns downstream were constructed to handle the flow rates promised at the time of the dam's construction.  None of these levees have ever been tested at these levels, yet they must hold back millions of acre-feet of floodwater for the entire summer without failing.  In the flooding of 1993, more than a thousand levees failed.  This year's event will be many orders of magnitude greater.

At this point, you certainly have mismanagement of the flood control aspects of the Corps' duties, and priority to environmentalism over humanity.  Does it rise to the level of trying to create mass starvation?  If your preference for wildlife destroys the people's food, how can it not create starvation?  We'll just buy food from somewhere else?  Where, exactly? 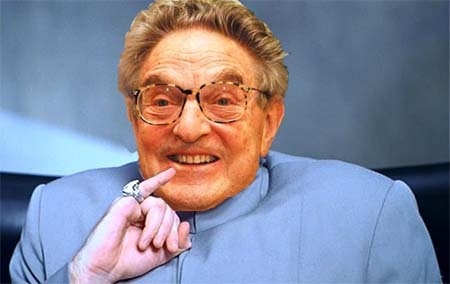 
Speaking of evil sons of bitches, George Soros appears to be "investing" in farmground through the same puppet company that he used to get into the grain elevator and fertilizer business. The company is called Ospraie Capital Management and is buying up farmground in a joint venture with Teays River Investments as a partner. Here is that announcement:   Click Here

Now Soros may just be putting his money where he sees the opportunity for good returns, or he may be trying to buy up all the food production in the world so everyone has to play his game.  Hard to say.  Ann concludes with this bombshell (emphasis added by me):


Bottom line: Soros, through Ospraie, is buying up farmground. Please also note that the hotlink citation above is dated June 26, 2009. My contact says this has been going on for two years - and also remember what I told you about farmground prices inflating wildly, especially in Illinois. I have personally confirmed farmground in Illinois selling for $13,000 per acre within the last month, whereas that same kind of ground in Illinois was going for $5500 per acre the day Obama was inaugurated.

I'm sure you have heard the Chinese are buying up US farmland due to weather problems with their own crops.  Chinese and US corn farmers are having problems.  I summarized some of these here, earlier in the month, and GardenSERF has an excellent summary here.

The question is one of malice or stupidity; maybe more a question of whether the greenies are evil or useful idiots.  Are the environmentalists intentionally trying to destroy the US by regulating us into paralysis?  Remember when the environmentalists ordered the end of irrigation in the central valley of California, creating a crippling man-made drought in some of the best farmland in America, to protect the Delta Smelt?  A 2" minnow that was said to be harmed by the irrigation dams - by some enviro-weenies; other scientists said the population changes had nothing to do with irrigation.  Since the little fish isn't much of a poster reason to starve the people in the valley, the National Marine Fisheries Service said the irrigation would kill whales, and we sure can't have that!  I'm sure all of us would gladly lie down and die to save a whale.  Confidentially, here's a suggestion.  If you would gladly lie down and die to save the whales: go ahead.

The Holodomor was the deliberate starvation of the Ukraine by Joseph Stalin in the 1930s.  If you just search the term you'll find descriptions and denials, not unlike those of the Nazi holocaust just a few years later (if I had more readership, a Soviet apologist would probably show up here to rebut me).   A consistent and tragic tactic of socialist regimes from Stalin to Mugabe is to take farm land away from those who have been managing it successfully and giving it to the underclass.  Famine and death is the frequent result.

Is some group or small number of groups trying to starve the US?  It's hard to say, but I think the argument can be made.  There are groups who will say other countries around the world have a more tenuous food supply than we do, and many in the US could "stand to lose a few pounds" by shipping more food overseas.  There are those who seem to think "we have plenty of farms in the US" and "it can't hurt to shut down a few million acres to protect the rivers or the wildlife".  And, quite possibly, there are those who would like to see us starve because starving people are easier to dominate.
Posted by SiGraybeard at 8:51 PM

Labels: commies and other idiots, enviro-nuts and flakes, the big picture