Lessons Learned As We Totter Through Hurricane Season

It has been hurricane season for just about a month now (it's June 1 through November 30) and while the Atlantic tropics are quiet, this weekend marked the start of our regular summer monsoon season with some impressive rain on Saturday and more gentle rain today.  I saw over the weekend that there was an area in the Bay of Campeche that some models said would organize, but it hasn't really.  The NHC is giving it a 50% chance of becoming a "cyclone" before it goes ashore in Mexico, probably near Tampico and probably as a depression.

Last spring, I took the unusual move of preemptively replacing our water heater.  Around here, getting a decade out of a water heater is good, and ours was  hitting nine years old.  Rather than have it go out at an inopportune time, we elected to replace it with a natural gas powered tankless water heater.  There's a handful of reasons for this, but it was the first time we connected to the natural gas utility, and there was a pretty fat rebate for all we did.  After our two hurricanes in 2004, the natural gas system worked for everyone I knew, while many people were without electricity for days to weeks.  A "hot" shower may not be your goal after running a chainsaw in the summer heat cleaning up the damage, but a shower sure is nice to have.

Saturday night, I noticed there was no hot water.  After a brief effort to fix it, about midnight in our back yard with flashlights, we gave up showering and got up Sunday to try and figure out what was wrong.  It ended up being the outdoor ground fault indicating power fixture, and it cost me about $20 to get a better outlet and install it.  The lesson?   Keep some AC outlets, switches and electrical supplies, in case the stores are down, or inventory isn't being kept up.

If you don't have one, you should have a voltmeter.  Nowadays, basic digital multimeters can be found for $20 or $30.  Electronics stores like Fry's have a wide assortment and even Lowe's or Home Depot have them for home electrical work.  They're very easy to use; and the auto-ranging ones can almost be used by the brain dead.  In my case, once I opened the junction box cover, I could see 120 VAC on the input to the fixture (metal pieces on the sides) but not when I stuck the probes into the outlet.  In general, you'll want to turn off the breaker for anything you're working on, but you probably want to test the outlet with the power on.  It's more direct that way.  Just don't touch metal and you'll be fine.  Turn off the breaker to wire in the new outlet or switch.

An interesting aspect about hurricanes is found in the work of Dr. Ryan Maue at FSU Dr. Maue has been tracking the amount of energy transferred by cyclones around the world for some time, and energies are at low levels not seen since the late 1970s.  Don't get too comfortable: the North Atlantic contributed around one third of the entire world's cyclone energy last year, and one storm can really ruin your day.   Dr. Maue's work appears to completely debunk the idea that a global increase in the number or severity of storms is going on, as advanced by Al Gore and the Hysterics (I saw them open for Ultimate Spinach in the '60s).  His work shows patterns in hurricane strength more in line with the known oscillation patterns. 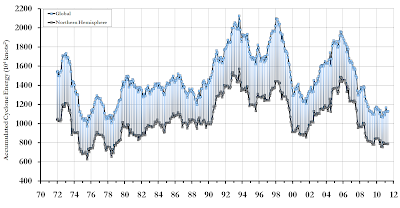 Will the US get hit this year?  Just like all other preps, it's better to have and not need...
Posted by SiGraybeard at 9:15 PM