The Bernank says that the economy will resume growing once again as we recover from disruptions from the Japanese earthquake/tsunami disaster.  The bad numbers last month are only due to short term "head winds" or a "bump in the road". 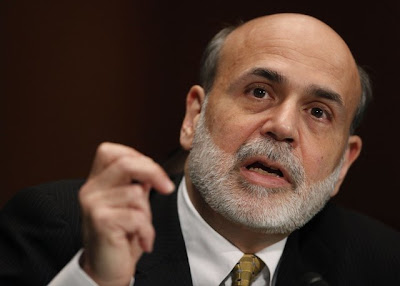 The problem is, that when you account for their printing press, the economy isn't growing.  When you look at the source for that pathetic "54,000 jobs created" we saw reported, it's from using the Bureau of Labor Statistics birth/death model - it's not measured or reported jobs.


The Federal government borrowed and spent $5.1 trillion over the past four years to generate a cumulative $700 billion increase in the nation's GDP. That means we've borrowed and spent $7.28 for every $1 of nominal "growth" in GDP. (emphasis in original)

That's bad enough as it is.  Would you promise to pay $7.28 to get $1?  Maybe if you desperately needed to get you car out of the shop or some emergency like that, and the only guy who would lend it to you was "Friendly Guido", the local loan shark, but you sure couldn't make a steady living out of it.  As I frequently say: "don't worry: it's not that bad.  It's worse".


In constant dollars, GDP is flat: we got no growth at all for our $5.1 trillion: zip, zero, nada. In constant dollars, the GDP in 2011 might return to the 2007 level, if the economy continues "growing" at the same pace reached in the first three months of 2011. If not, then the GDP will actually be lower than pre-recession levels.

The Fed has pumped amazing amounts of money into the system.  After all, they need to create that money if they're going to keep up with the incredibly prodigious deficit spending of the Obama administration, considering China is essentially getting out of US Treasuries.

As I've said a couple of times already, I believe QE3 is going to happen.  It is simply the only thing they know how to do.  The dip in the broad stock market indexes could be caused by the people who want QE3 putting pressure on the banksters.  And it may be the old adage "sell in May and go away".  A look at this 6-month chart shows clearly that the S&P 500 has been essentially flat since mid February. 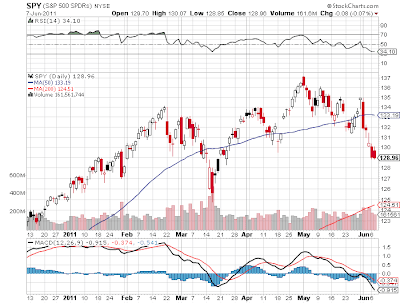