One of the most persistent falsehoods heard from anti-gunners, I mean besides the penis jokes, is that gun culture folks are all toothless idiots who "jest wanna shewt sumthin".  Of course, when you're familiar with the facts, you know that a large percentage of the folks who carry study all the time: they study tactics, take classes and spend a fair amount of their resources trying to be ready should they be called on to use that gun they carry.  (To be fair, there is probably a few percent that fit the mythology, but about 5 or 10% of the population of the country thinks we never went to the moon, so there's a few percent of losers no matter what group you look at.)

So in keeping with the idea of studying, with thanks to the Michael Bane Blog, we have this link to an alternative look at the persistent myth of stopping power, by Greg Ellifritz.  It's really one of the most interesting things I've read in a while.


The average number of rounds until incapacitation was also remarkably similar between calibers. All the common defensive calibers required around 2 rounds on average to incapacitate. Something else to look at here is the question of how fast can the rounds be fired out of each gun. The .38 SPL probably has the slowest rate of fire (long double action revolver trigger pulls and stout recoil in small revolvers) and the fewest rounds fired to get an incapacitation (1.87). Conversely the 9mm can probably be fired fastest of the common calibers and it had the most rounds fired to get an incapacitation (2.45). The .40 (2.36) and the .45 (2.08) split the difference. It is my personal belief that there really isn't much difference between each of these calibers. It is only the fact that some guns can be fired faster than others that causes the perceived difference in stopping power. If a person takes an average of 5 seconds to stop after being hit, the defender who shoots a lighter recoiling gun can get more hits in that time period. It could be that fewer rounds would have stopped the attacker (given enough time) but the ability to fire more quickly resulted in more hits being put onto the attacker. It may not have anything to do with the stopping power of the round. (emphasis added)

I find that bolded text a very interesting statement.  Look at these two data sets, for example:

compare that to this one:


What I believe that my numbers show is that in the majority of shootings, the person shot merely gives up without being truly incapacitated by the bullet. In such an event, almost any bullet will perform admirably. If you want to be prepared to deal with someone who won't give up so easily, or you want to be able to have good performance even after shooting through an intermediate barrier, I would skip carrying the "mouse gun" .22s, .25s and .32s.

An interesting comparison is how those numbers for "incapacitated by one shot" jumps for rifles and shotguns.  As has been said many times, a handgun is for fighting your way to your rifle.  I'll add "or shotgun".  If you really need to stop someone right freakin' now, grab one of those! 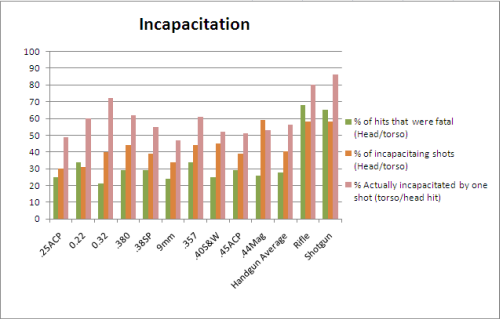 The famous FBI study of the Miami shootout concluded (to paraphrase) the three things that matter the most are: "shot placement, shot placement, and shot placement".  Ellifritz adds to that, and holds out the prospect that you're only going to need more than two hits in two cases: the goblin is really high on something and is oblivious to having been shot, or the goblin really wants to hurt you and will walk through a hail of lead to do it.

To use his conclusion:


The results I got from the study lead me to believe that there really isn't that much difference between most defensive handgun rounds and calibers. None is a death ray, but most work adequately...even the lowly .22s. I've stopped worrying about trying to find the "ultimate" bullet. There isn't one. And I've stopped feeling the need to strap on my .45 every time I leave the house out of fear that my 9mm doesn't have enough "stopping power." Folks, carry what you want. Caliber really isn't all that important

There's a lot of good stuff in that report; so you should go read.

(Special offer to O. F. Mossberg & Sons: I'll sell you exclusive rights to the phrase, "Mossberg!  When you absolutely, positively need to kill someone right freakin' now!"  Call me).
Posted by SiGraybeard at 9:19 PM