How John Corzine Could Be Archduke Ferdinand

The assassination of Archduke Ferdinand was, by everything I've read, not regarded as an important event beyond the immediate area.  A minor incident in history except for being widely recognized as the trigger that led to World War I - recognized in hindsight, I might add.  World War I led inexorably to the Weimar Republic, which led inexorably to Hitler, and World War II.  The world is still not fully recovered from WWII, and, like the first dark ages, it may never really recover, it's just that after some number of centuries, the silt of history will cover the damages over.  All because some minor royal figure was assassinated in a province with ambitions for independence.

And so it seems with MF Global.  It looks as though the collapse of MF Global is quietly leading to the collapse of the world's banking systems.  That will wreak damages as bad as any war.  In the wake of the damages done by the collapse of MF Global, many smart people are starting to recommend getting out of equities or any form of paper.  The first I read was Ann Barnhardt, in this piece from 11/17, where she declares she is closing her capital management business:

Many followed.  On this page, I wrote about the fundamental dishonesty of our financial system (link to Bayou Renaissance Man) and how MF Global Eff'ed Gerald Celente.  Denninger has written on this, as have many others (too many to link to).

Tuesday, Gonzalo Lira writes that he thinks we're on the verge of a global run on the banks, which would precipitate collapse. The problem is how the "system" handled the theft of customers' money:

Think of segregated accounts as if they were the content in a safety deposit box: The bank owns the vault—but it doesn’t own the content of the safety deposit boxes inside the vault. If the bank goes broke, the customers who stored their jewelry and pornographic diaries in the safe deposit boxes don’t lose a thing. The bank is just a steward of those assets—just as a brokerage firm is the steward of those customers’ segregated accounts.

But when MF Global went bankrupt, these segregated accounts—that is, the content of those safe deposit boxes—were taken away from their rightful owners—that is, MF Global’s customers—and then used to pay off other creditors: That is, JPMorgan.

and describes how 40,000 customers of MF Global were robbed of their segregated accounts to the tune of billions of dollars (legally, due to rehypothecation).  Lira goes on to say:


As I write this, a lot of investors whom I know personally—who are sophisticated, wealthy, and not at all the paranoid type—are quietly pulling their money out of all brokerage firms, all banks, all equity firms. They are quietly trading out of their paper assets and going into the actual, physical asset.
...
Now, because of this open kleptocracy and cronyism being shown by the financial authorities in the wake of the MF Global bankruptcy, we’ve been obliged to put together a new Scenario, devoted exclusively to preparing for a run on the markets: What to do in order to protect your assets from regulatory malfeasance, if there is a system-wide MF Global-type breakdown and a subsequent run on the entire financial system.

And there will be such a run on the system: It’s only a matter of time. In fact, the handling of the MF Global affair has sped up the timeframe for this run on the system, because the forward-edge players—such as Demeester, myself, and my other acquaintances who understand the implications of the bankruptcy—realize that the regulators will side with the banksters, and not the ordinary investors: So we are preparing accordingly.

Gonzalo Lira is in the financial business: his job is to plan for scenarios like this.  The fact that the planners, and the savvy investors he writes of, along with Ann Barnhardt, Karl Denninger, and more, can see that the banking system is sliding into collapse, is dire warning to all of us. 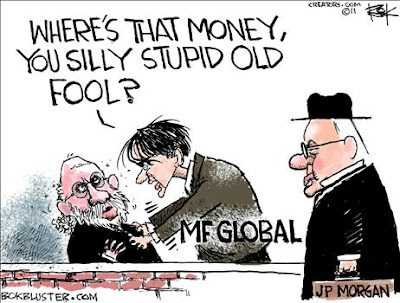 John Corzine, as seen by Chip Bok, at Town Hall.
Posted by SiGraybeard at 6:18 PM