A Little Geeky Side Trip

Alright, an extremely geeky side trip, but geek is in my charter.  This is the kind of thing that just delights me.

Late in October, a group of amateur rocket makers launched Qu8K (pronounced Quake - after the video game) in an attempt to exceed 100,000 feet in altitude.  The group's calculations showed they reached 120,000 feet, over 22 miles.  This qualifies them for the $5000 Carmack 100kft micro prize, although since they had some troubles with their GPS locking during the flight, it's not clear they have applied. 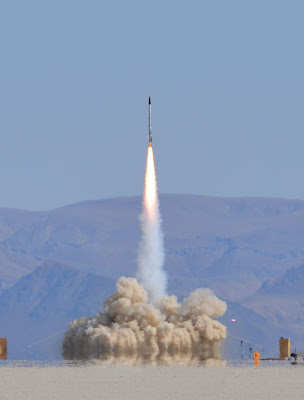 Qu8K moments after liftoff.  The acceleration is extremely fast - you have 4000 lbs. of thrust in a 320 lb vehicle.  The vehicle reaches Mach 3 in seconds and coasts up to altitude.

Much more information at their web page, including a cool video that should be watched at full screen in HD mode.

There probably wasn't an equivalent rocket on Earth until the 1930s; today, a determined group can build one in their shop.
Posted by SiGraybeard at 8:26 PM