I'm sure you've seen the reports that Eric Holder, that pathetic, incompetent excuse for attorney general, has written an op ed for the NY Crimes saying the reason he's in trouble is bloggers?  No Lawyers, Only Guns and Money ran a nice summary on this,


But Mr. Holder contended that many of his other critics — not only elected Republicans but also a broader universe of conservative commentators and bloggers — were instead playing “Washington gotcha” games, portraying them as frequently “conflating things, conveniently leaving some stuff out, construing things to make it seem not quite what it was” to paint him and other department figures in the worst possible light.

ooooh!  It's the bloggers!  Not his incompetence, or the insane plan to sell enough guns to the drug cartels to make it look like American gun stores were the problem, and get support for gun control.  No siree.  And not that, it's because ... wait for it... he's black!


Mr. Holder said he believed that a few — the “more extreme segment” — were motivated by animus against Mr. Obama and that he served as a stand-in for him. “This is a way to get at the president because of the way I can be identified with him,” he said, “both due to the nature of our relationship and, you know, the fact that we’re both African-American.”

(emphasis in the original blog)

I think Sean from the NC Gun Blog has the best summary in the comments:


So Holder was willing to cause the deaths of hundreds of Mexicans by selling arms to their killers. He did this in the hopes of drumming up support for gun control here. He decided that the deaths of a bunch of foreigners was the price he was willing to pay for a domestic agenda. He looked at the dead Mexicans as tools to get what he wanted.

I think I know who the racist is in this scenario, and it isn't us.

Listen, Mr. Holder, I don't know or care what gum ball machine you got your law degree out of, but you are a despicable human being.  The only race that matters to me is the human race, and you discredit that in everything you do.  You deserve not just impeachment, but a real grand jury investigation and, if things are truly the way they look, the same life imprisonment any common criminal would get. 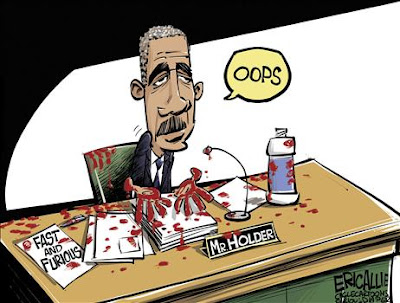