I honestly don't remember if I laughed out loud at the idea or just shook my head in disbelief, but President Obama, head of probably the most virulently anti-Israel administration in US history, is campaigning on how good a friend he is to the beleaguered state.


I try not to pat myself too much on the back, but this administration has done more in terms of the security of the state of Israel than any previous administration. And that's not just our opinion, that's the opinion of the Israeli government.

As the author of that short American Spectator piece snarks, 'Anyone who publicly claims, "I try not to pat myself too much on the back," is precisely the sort of person who does so on a daily, if not hourly basis.'

It's not unusual for politicians to "run toward the center" when election time comes around, and try to convince the people they're really a moderate, but this is a new level of absurd.

David Horowitz and Front Page Magazine have prepared a video called "Obama - The Anti-Israel President".   I link to the HD video rather than a mini-version to show here.

Pro-Israel? Srsly?? In just the last few days, Obama's ambassador to Belgium blamed Muslim antisemitism on Israel, Secretary of State Billary Clinton criticized women's rights in Israel; strangely, the only place in the mid-east where women are recognized as persons with all the same rights as men rather than being legally cattle and the property of men; and Secretary of Defense Leon "the Eyebrows" Panetta chastised Israel for not giving away more territory than they already have and told them to "get to the damned table!".

Few people ever mention that Hillary's closest aide is Egyptian-American Huma Abedin, who happens to be Anthony Weiner's wife.


Weiner is married to Huma Abedin, who works as a top aide to Clinton. Abedin, who once worked as an intern to Hillary, is close with both Bill Clinton and his wife.

A Clinton/Weiner connection is probably only good for a Beavis and Butthead chuckle, and the fact that Mrs. Weiner is from Egypt hardly worth mentioning.  What is worth mentioning is that Huma Abedin's family is in the Muslim Brotherhood,


Furthermore, Huma Abedin's brother, Hassan, "is listed as a fellow and partner with a number of Muslim Brotherhood members."  Hassan works at the Oxford Centre for Islamic Studies (OCIS) at Oxford University.  The Egyptian Al-Azhar University, well-known for a curriculum that encourages extremism and terrorism, is active in establishing links with OCIS. 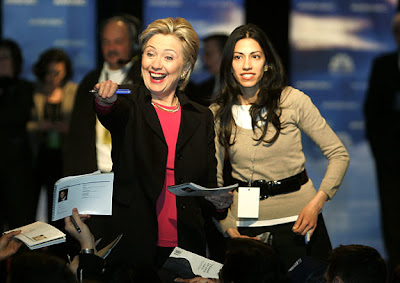 The American Thinker piece goes into far more detail than I can in this space, including activities of Huma's mother, so you should RTWT.  There is more information on Front Page. I am concerned that a family with ties to the Brotherhood is in this high a position.  For all I know, Mrs. Weiner is fiercely independent of her family and loves the US to death (hers, not ours); but I think the wise counsel of "trust but verify" goes well here.

After all, Muslim Brotherhood influence at the highest levels of the Obama administration (sorta like this Canadian communist says) would pretty much completely explain our abandonment of Israel, wouldn't it?
Posted by SiGraybeard at 8:41 PM