We Have a New Executioner

On July 8, 2010, I wrote on the recess appointment of Dr. Donald Berwick to the head of Medicare/Medicaid Services, "Meet Your Executioner". I still think there's a lot of important information on the mindset of the administration and their plans for Obamacare in that piece.  For one thing, Dr. Berwick voiced opinions that seem to express that supply and demand doesn't function in health care, claiming that the UK's National Health Service was better than ours.


You see, Dr. Berwick is a big fan of the British National Health System.  That's novel because most of the British people are not fans of the NHS, and you have to go a long way (apparently, all the way to Harvard) to find someone who is in favor of it.  In a speech marking the 60th birthday of the NHS, he praised the it for deliberately creating scarcity: "You [the NHS] plan the supply; you aim a bit low; historically, you prefer slightly too little of a technology or service to much too much and then you search for care bottlenecks and try to relieve them."  In a time when the largest wave of retirees in US history hits the Medicare system, the fed.gov has cut the budget for the system by half a trillion dollars ($525 Billion).  The only conclusion is that life will be worse for us than for those who were in the system before us.  This is in complete agreement with the trend of this administration, which (as far as I can tell) is completely dedicated to making all of our lives more miserable.

Dr. Berwick has left his position - I can't truthfully tell you how much damage he has done, but this gentleman claiming to be Neurosurgeon called into Mark Levin's radio program, saying that under the new care guidelines, if a 70 year old presents in the ER with a bleeding brain, surgeons will not be "allowed" to try to save that person's life.  In Berwick's place, the Obama administration has appointed Marilyn Tavenner, former head of the Hospital Corporation of America.  Mrs. Tavenner is extremely unusual for an Obama appointee: she has worked in industry for most of her life - her background was as an ICU RN, not an academic like Berwick - and she actually appears competent.  As you well know, such attributes are unheard of in this administration. 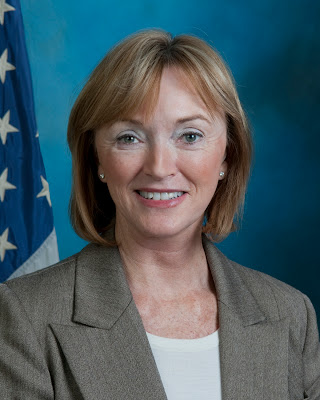 It is worth mentioning that part of her job is to clean up Medicare fraud, and she worked for HCA when it was under investigation for the largest Medicare fraud in US history.  HCA ultimately paid a $1.5 billion fraud.  As that American Spectator piece (previous link) says,


There is no indication that Tavenner was directly involved in HCA's billing skullduggery. However, after the Berwick controversy, it's surprising that even the famously tone deaf Obama would nominate someone with such problematic ties to the industry she will regulate. These ties have also been ignored by most major media outlets, whose coverage of Tavenner has consisted primarily of puff pieces focusing on her early years as a nurse. This contrasts sharply with the coverage received by Republican Rick Scott, who was the CEO of HCA during the investigations. Scott was never implicated in the fraud scheme either. But it did happen on his watch, and every "news" story written about him while he was running for Governor of Florida insinuated that he was somehow involved in the fraud.

The important question is whether or not she's an upgrade from Donald Berwick,


There is no sign, however, that she holds different views than her controversial predecessor. She spoke to the National Association of Medicaid Directors last month and echoed refrains often heard from Berwick. Her position on giving the states control of their own Medicaid programs, which are funded by state as well as federal funds, is virtually identical to that of the good doctor: "That approach would simply dump the problem on states and force them to dump patients, benefits or make provider cuts or all the above." In reality it won't necessarily force them to do any of these things. It would, however, allow the states to develop creative ways of covering the poor, reduce administrative costs, and reduce the coercive power of Washington over the states. One suspects that the last is Tavenner's primary concern.

Tavenner wrote an op-ed for the Washington Examiner, full of the glib, hard to decode statements that bureaucrats make.  I keep hearing from Washington how wonderful things are while every doctor I know says the cuts to Medicare patients are so great they are refusing new patients.

Is she an improvement over Donald Berwick?  It would be hard not to be, but I don't see as much written by her and about her.  It will take more research.

In the meantime, Mrs. Tavenner, folks would appreciate if you don't piss on us and tell us it's raining.